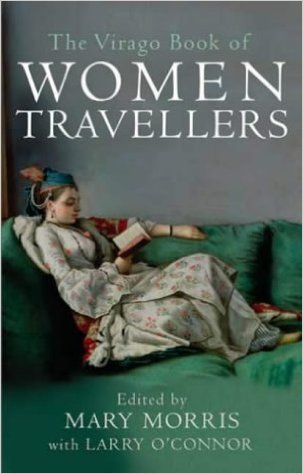 My first purchases for my “reading female travel writers” project were at my local Waterstone’s. I don’t go there very often as I normally read ebooks. However Christmas brought me physical book vouchers rather than anything I could use to buy ebooks, so I thought I’d apply them to this mission.

So I hit the shelves to see what I could find. And it’s worth noting that in the two book cases that comprised travel writing, I counted no more than ten books authored by women. It reinforced my feeling that this project was one worth undertaking. I came away with two titles, which I’ll be reading in January and February.

I’ll preview February’s book soon, but before that is January’s choice, which I am already several pages into.

Titled The Virago Book Of Women Travellers, and edited by Mary Morris with Larry O’Connor, it jumped out to me because I wondered whether an anthology would be a good introduction to the world of female travel writers.

I did have some instant reservations, just going by the name (and not just that it was “women travellers” rather than “female travellers” – but hey, at least it wasn’t “lady travellers”). Is there a risk, I wondered first, of somehow lumping women together, making them out to be all the same when, really, all they ostensibly shared was their gender (no trivial commonality, I grant you)? And further, I worried that as it was co-edited by a man, was I straying close to polluting the project somehow?

I dismissed those concerns, however, as I considered that a compilation would be a perfect place to start. By getting a few pages each of several authors – extracts are contained from somewhere in the region of fifty writers – it would give me a flavour of the content and style that female travel writers can produce. Also, there would be the inevitable introduction from the editors which (while I am conscious that most editors’ introductions are usually self-indulgent waffle the reader can almost always survive without) may hopefully validate or at least help me reflect on the core questions I have as I approach this reading project.

Moreover, what stood out in the contents pages was the long period of history covered by the included writers. Stretching back to the eighteenth century, the book contains a tremendous range of eras, and indeed parts of the world, though almost to a fault as there are actually very few from the twentieth century (let alone the second half of it). That’s a point for wonder, as it can’t have been easy for any woman to travel back in those days, or even – especially if in the company of men – to have the time and space to make their own observations, draw their own conclusions, and then of course have their work published.

I’ve said before that I’ve not read enough classic travel writing – or indeed much from before the middle of the twentieth century, so there’s no harm in me reading a book that is so slanted towards bygone eras. Travel writing is all about exploring and revealing the world, and I’m sure it still counts as such if that world doesn’t necessarily exist any more.

So what drives women in the eighteenth or nineteenth centuries to travel the world? Well, perhaps it’s the precisely the same motivations as men, so maybe my question should be more about what enables them to do so, and what is the result of their adventures in terms of their writing?

I’ll hopefully have some answers by the end of the month, and will write a review when I’ve finished the book.