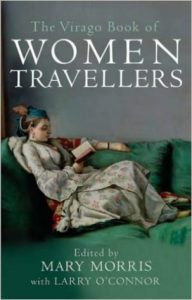 I’m glad in a way that the first book in my Reading Female Travel Writers challenge was such a hefty tome – at over 400 pages it set me quite a pace in terms of reading and got me into a healthy habit of regular reading that I’ve not been in for some time. It’s probably going to be the longest book in my series, so if I could get this read in a month (admittedly, I finished it with barely a day to go), then the rest of the series would not be a problem.

I was glad for a second reason, which I mentioned in the preview of this book: that it would allow me to get a good overall feel for the world of female travel writers. And I certainly did, with a diverse range of eras, types of women and locations around the world contained within the pages of the compilation.

We meet independent travellers and those on the road with family, women on long epic journeys or more focussed trips, famous names and obscure, mountaineers and motorcyclists, aviators and anthropologists, those treading well-kent routes and brave pioneers, young women and old, but all intelligent and good writers. The writers we meet tell us about horse-riding and religion, Canadian First Nation totem poles, the beauty and character of so many cities, towns and regions, insect-infested canoe journeys on African rivers, and adventures in jungles both urban and literal.

The book is sensitively curated by the editors, with a helpful wee overview at the beginning of each chapter (themselves each usually a handful of pages long), and an interesting introduction about how and why women travel and write, and the opportunities and obstacles therein. The introduction takes a surprisingly dark tone, however, in focusing significantly on the risk of sexual assault for women on the road.

And yet I hope female readers are not put off the idea of travel by the introduction, because the fifty or so contributions generally do not reflect this. Sex and sexual assault appears very lightly as a theme throughout, taking until over a quarter of the way through the book’s 400 pages before a writer mentions any sort of male interest in her.

In fact, very few make major reference to sex: only a small number talk about being hassled by men in bars or other public places, and only two extracts that I recall are dominated by portrayal of misogyny (one reflects on it very compellingly but in such depth that it frankly stops being travel writing). Meanwhile one writer disguises herself as a man to visit a holy site, and one extract is written against the background of the author’s pregnancy. But elsewhere, it is often easy to forget that the writers are women, and indeed some extracts could probably pass, if anonymous, as writing by men.

Which brings me to the second misjudgement I found in the book, that of an extract by “Box-car Bertha”, whose life dates are given as “ca. 1900 – ?”. She gives us a fast-paced, no-holds-barred account of life among the hobos and outcasts of 1930s USA who live on railcars and in rough back streets. Struck by this fresh writing from an unknown writer, I googled her, only to discover that not only was she fictitious but her extract was written by a man, Ben Reitman, in his novel Sister of the Road. The two possible explanations for this extract’s inclusion are both equally extraordinary and disappointing: either the overall theme of female travel writers was knowingly stretched to include this admittedly excellent piece, or the editors were clueless about its fictitious and male-authored nature.

That’s the negatives out of the way.

On the positives, there were a great many wonderful writers I stumbled across of whom I’d never heard – such as Flora Tristan, Frances Trollope, Isabelle Eberhardt (whose packed and tragically short life is worth reading up on), and many others. Maud Parrish writes exhilaratingly about adventures in Yukon and Alaska, the intriguing Mrs F D Bridges (about whom we know little as she travelled in the shadow of her husband) describes nineteenth century Mormonism compellingly, and Emily Hahn writes vividly about her opium addiction in China (one of a few women to focus heavily on addictions).

And also a shout out to the names of writers who appear later on my reading list, such as Dervla Murphy whose energetic account of a long hike in Madagascar had me ready to get stuck into Full Tilt in February, and two whose extracts I will read the full versions of: Rose Macaulay (June) and Rebecca West (August).

Overall, the book was enjoyable and, despite being long, a fairly easy and satisfying read due to the bite-size nature of extracts and the fact that the reader can be swept from one era and one location to another with the turn of the page.

Besides the three writers I will meet again in this project, I have a few names I will look out for and try to hunt down in the future. It’s certainly whetted my appetite for the project, raised the bar high, and given an early resounding “yes!” to the stupid and obvious question of whether women can make good travel writers.