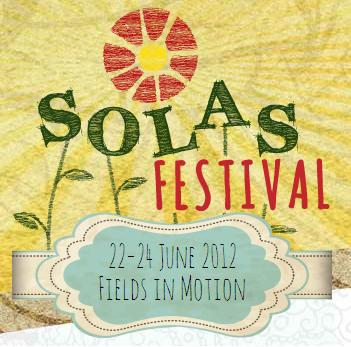 I’m thoroughly chuffed to announce that I’m going to be appearing at the Solas Festival later this month.

If you’ve not heard of Solas before, it’s a wide-ranging annual arts festival based in Biggar, South Lanarkshire, and it features music, talks, performing arts, literature and a wide range of family-friendly activities.  This year it will be held over the weekend of 22-24 June.

Solas has a broadly Christian ethos, with a strong emphasis on justice and equality – so it’s broadly comparable to the bigger and more famous Greenbelt Festival, but I’m told that Solas is has a real strength in its small size and sense of community.

I’ve never been to Solas, or Greenbelt for that matter, though many friends have persuaded me that I would hugely enjoy both of them.  It is a great privilege, then, to be invited to Solas as a presenter.  As I say, it’s a Christian-inspired festival, but the content is not particularly religious, so I’ll be talking about my travel writing – in particular the mullet mission, but also my approaches to travel and writing more generally.

I’ve yet to firm up precisely what I’m going to do, but I think I may focus on the theme of the unexpected under our noses, an idea that lies behind The Next Stop and which is currently stirring a few other projects in my head.  I might also give a little preview of my forthcoming second mullet book (an update on which I’ll be blogging next month, I promise) and I’ll hopefully have some copies of my first book for sale too.

It’s my first big event since the Inverness Book Festival last year, so I am a little nervous.  Not least because – the location effectively being  a few tents in a field – there’s not going to be any capacity for a technological accompaniment.  The story of my adventures – and I am sure anyone’s adventures – is always easier to tell with visual aids.  So I will have to rely purely on my own spoken word to enthuse people about getting out to explore the world and picking up their laptop or pen to write about it.

I’m looking forward to it, though, and to taking in the wider event as a whole.  There are a number of interesting things on the bill, including various writers, speakers and politicians who should be worth hearing, and a number of big-name bands (some of whom I’ve even heard of).  I’m also excited to see that Calamateur, of whom I am a friend and fan, is also playing.

I don’t yet have full details about the timing of my talk, and I’ll no doubt blog or tweet again once things are confirmed, but I do know that it is going to be on the Sunday.  If you’re coming along, it would be lovely to see you.  If you’re interested, there are still tickets available.

It’s not that far away now, so I’d best get preparing.  And I’d best dig out and dust down my tent.