Thanks partly to Berti's endeavours, Scotland is getting used to not being involved in World Cups. Although I'm perfectly happy on the whole just to sit back and enjoying the spectacle of the greatest show on earth, I've nevertheless been wondering about who I should be giving my support to.

I'm torn between three teams. One is Trinidad and Tobago – firstly it's a bit of underdog empathy and secondly they're in England's group, but thirdly and most importantly it's because they've got more Scottish-based players (six) than any other team in the competition.

Then there's Australia and Croatia, largely for travel reasons. I've been to both countries, met wonderful people, and had really good times there. In Australia's favour is the fact that I know loads of Aussies, there's a historic connection, and they're new to the competion. But then on the other hand football is far from being the biggest sport Down Under, while World Cup success matters so much more to a proud, football-mad country like Croatia. Croatia is my favourite country, so I think they might just come top for me. 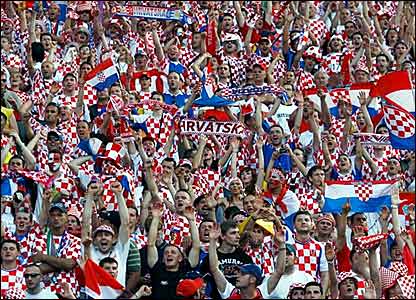 When Niall and I were on our big travels through Eastern Europe in 2001, we made a point of seeing as many games as we could, as the qualifiers for the 2002 World Cup were on around that time. We saw Croatia v Belgium in in Zagreb, which Croatia won, and the atmosphere was amazing both in the stadium and in the packed city centre bars afterwards.

Earlier, there was Hungary v Romania in Budapest, a match I remember for the fierce animosity between the two countries which nearly boiled over into crowd violence, and for the referee being Scotland's very own Hugh Dallas. We also saw a league match in Slovakia, and a Slovenian third division game attended by about twenty people which was most notable for its mulleted referee.

Beyond watching matches, the international language of football came into play many times on our trip. On one occasion we shared a train carriage with two Bulgarians. Despite having no language in common, we were able to talk about Illian Kiriakov (then of Aberdeen) and Stillian Petrov (Celtic) to break the ice. And Niall impressed a Czech man in Brno who kindly offered to give us a lift one day by knowing that the local team was called Bobby Brno. Having a good memory for UEFA Cup matches from the 1990s onwards does wonders for your knowledge of geography.

No wonder the Americans are so often accused of being ignorant of other countries. They need to play football more. Proper football.