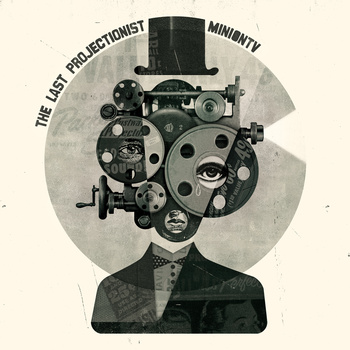 MinionTV, about whom I’ve blogged before, will be releasing a new album in July.  I’m a big fan of their music, and absolutely love their first, self-titled, album and their magnificent EP Arecibo.

Called The Last Projectionist, it’s something of a departure for them.  The Liverpool-based purveyors of beautful, arty post-rock have produced their first concept album, and this interview explains in a bit more depth that they aimed to produce an album that evoked something of the impact – both positive and negative – of technological progress.  You perhaps get the idea from the album cover (right) – a retro, steampunk hint at the blend of the human and the technological.

The title in itself, The Last Projectionist, hints at some of those ideas, and I was delighted and privileged to be given a digital copy of the album to listen to and review.

I suspected I would love the album, as I have enjoyed their previous output, ranking one or two tracks from both the debut album and Arecibo as among my favourite tracks in the post-rock genre, easily comparable to the greats such as Mogwai, Explosions in the Sky or Mono.

Indeed I did enjoy The Last Projectionist, but I confess it took me a while to get into it.  I eventually realised that it was because The Last Projectionist represented a slightly deeper, richer and more mournful sound than their previous work, and is different in that it attempts to capture the concept that inspired the album.

The opening track, This is Fucking Glorious, has a dramatic start with cathedral-like richness in the initial keyboard tones, soon joined by a pulsing drumbeat and then tense guitar rhythms that build up with great suspense to an eventual crescendo.  This releases the track into a soaring, funky screech of guitars that that is so catchy and compelling that the song feels a little too short. It is followed by Rockets Don’t Need Fuel, a similar fusion of tense guitar, deep bass, edgy drumming and atmospheric keyboards, blended to create a sense of expectation, anticipation and almost danger.

The next track, A Show Of Hands feels initially like a gentler and barer offering, with its lighter and perhaps more cheerful feel nevertheless delivering a tantalising, catchy riff and heavy conclusion; and it’s followed by another more gentle track IR Monster with a real haunting film-score melody.

She’s A Sleeper, the one track available for preview (above), returns to rich, heavy and dark guitars, and is perhaps the angriest on the album, hinting at some of Mono’s heavier tracks or The Smashing Pumpkins’ later works.  The album’s finale, eponymously titled The Last Projectionist, is another change of mood, back to soft, thoughful and mournful, hinting at the more negative, nostalgic elements of the album’s theme.

And that theme is something that, if I had a criticism of the album, I struggle to truly see in much depth outside the final song. While they are all great tracks – particularly the first two in my view, which are among MinionTV’s best – the sense of nostalgia for a technologically simpler era doesn’t come out so strongly except in the last track. That’s not to say it’s not an evocative album as a whole (it is, like most of their music), and it’s maybe a matter of interpretation as to how much the concept shines through.

Either way, for me personally, it doesn’t really matter.  As it is, concept or not, The Last Projectionist is an energetic, thoughtful, rich, deep album that is up to and perhaps even exceeds MinionTV’s own high standards.

Disclosure: I was given a free download of The Last Projectionist by MinionTV.