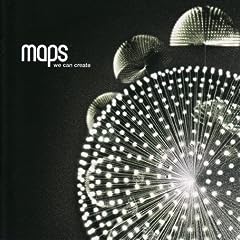 Instead of going to the Maps gig in Glasgow tonight, I am sitting at home listening to the album which I bought yesterday.

I guess you’d pigeon-hole “We Can Create” as electro-pop, and is smooth, mellow, catchy and a little bit quirky.

The sound is very lively, chirpy pop music, (mostly keyboards and percussions), with lyrics that are just a few notches less enthusiastic, giving it both an upbeat and chilled feel at the same time.

All tracks are listenable, though some stand out more than others, so I think this will be an album where I listen more to certain tracks rather than treating it as a coherent set of songs that fit neatly together.

Which means that while I love the album, I am still not quite sure what to do with it after four or five listens: it’s a bit too upbeat and hummable to listen to late at night while falling asleep, or when trying to work or read for instance, but too downbeat to be particularly motivational.

Beautiful music, yes, but not necessarily inspiring. I found it worked quite well, for instance, while working on the train to Aberdeen and back today. However, I think it needs a few more listens before I draw proper conclusions.

It’s definitely great music, though, I am sure we’ll hear more of Maps, and I’d recommend it to anyone who likes their music to be thoughtful, chilled out and interesting enough to keep you listening.

One thought on “The Maps album”