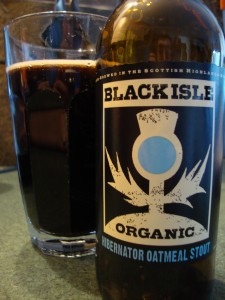 It doesn’t take much for my mind to wander to faraway lands and past travel experiences, and one such moment was prompted by having some friends to stay a couple of weekends ago.

As a present, they kindly gave us a box of beer from the Black Isle Brewery, one of the Highlands’ many producers of excellent real ales.  I keep meaning to visit it but in all my years in Inverness I’ve never got round to it.

A few of their beers are can be bought in town, including in the floor-stomping, multi-layered Hootananny, but others are only available direct from source, so I am sure I would enjoy the short journey to look around their tiny factory and shop.  Their beer is all organic, too, which is a sound principle to go by.

One of our gifted bottles that I tucked into this week was Hibernator oatmeal stout which, as the notes on the back rightly described, was a malty beer with a lovely chocolatey, tangy taste. It also, at 7%, boasted a healthy kick.

The taste, colour and strength instantly transported me back to the Croatian capital Zagreb, where Niall and I spent ten happy and leisurely days in the middle of our 2001 Frankfurt to Cairo journey.  We hadn’t really planned to spend that long in Zagreb.  In fact, we hadn’t planned to go there at all, cautioned off by various tips we picked up along the way that the city was industrial, unattractive, and not worth the detour from Croatia’s famously beautiful coastline.

But after meeting some Croatians in Pula, our previous destination, we were encouraged to join them there and were hugely impressed.  I could not understand the negative reports of Zagreb, because we found it a beautiful and instantly likeable place.  Its attractive city centre streets converged upon Ban Jelačić Square, a grand and proud setting that came alive in the evenings as a meeting place for young people.  A couple of streets nearby boasted a range of pavement bars and cafes and formed a hub of Zagreb’s cracking nightlife.

We stayed in a delightful hostel to the east of the city centre, a distance negated by the excellent tram service.  It was not far from the national football stadium where we watched Croatia host Belgium in an international game, and just over the road was a lovely park that provided an afternoon or two’s relaxed, forget-you’re-in-a-city amblings.  The hostel was also a stone’s throw from the Kraš chocolate factory, whose sweet aroma was a welcome homing beacon after our journeys back from a night out in the city centre.

Having a comfortable, friendly place to stay always increases the likelihood of being tempted to hang around a town or city longer.  But it wasn’t just the city’s trams we got to grips with in our time there.  As I think I mention in UTCWAM, we also met plenty locals and learned a fair bit of the language: I still remember “dva dnevna karta, molim” as the gateway to two all-day tram passes, while “dva velika piva, molim” would render two large beers.  And it was Croatia’s beers that we particularly appreciated getting to know.

While the light beers were a great refreshment in the dry heat of the late summer, Niall and I were particularly impressed with a delicious dark beer called Tomislav.  It was named after a famous Croatian king from the tenth century who is described as the first man to unite the country.  With a texture and tone not unlike Guinness, but with an engaging smoothness to the tongue, Tomislav (the beer, not the king) was a remarkably easy drink, and two or three could be pleasantly sunk with minimal effort.  It’s 7% strength however was not obvious in the taste, and its kick would only become apparent upon attempting to stand up afterwards.

We found Tomislav nowhere else outside Zagreb, suggesting that it was very local to the capital.  And I’d not thought of it for a long time until I drank the Black Isle Hibernator the other day, and was reminded through its similarity to Tomislav of those undemanding days of exploring what I think is still one of my favourite cities.

I’ve not been back to Croatia, nor had a Tomislav, for years.  But there’s a wee beer from just up the road here in the Highlands that can very easily transport me back, should I need or want a reminder.