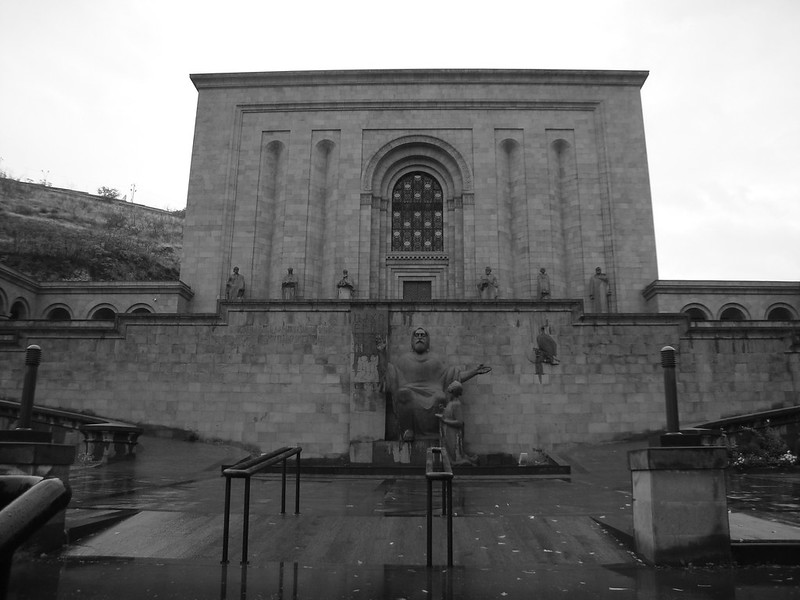 One of the oft-cited strengths of Esperanto is that it is a gateway to other languages. Learn Esperanto, with its simple grammar and accessible word-building, and you’ll not only better understand the mechanics of how languages work, but you’ll also gain the confidence of knowing what it’s like to successfully learn a language; thus making the next language easier to learn.

At least, so the argument goes, and to be fair there’s evidence to back up that claim.

While, as a (more or less) fluent speaker of Esperanto, I’m obviously sold up on the benefits of the language, I have struggled with this particular claim. I don’t dispute the line of thinking, and I don’t doubt the research, but I do doubt my own ability to demonstate it. Since taking up Esperanto about four years ago I’ve had no burning ambition to start learning another language. Indeed, whenever I look at another one I’m baffled as to why anyone would want to learn anything so complex and irregular.

And my first serious attempt to tackle a post-Esperanto language was a pretty miserable failure. Mind you, I probably could have found an easier and more accessible target than Armenian.

In the months leading up to my two autumn 2015 visits to Armenia, I thought it would be good to try to harness some of the basics – or even, who knows, a bit more. The first challenge was actually finding resources, which even in this internet age are not exactly widespread for a relatively obscure language such as Armenian.

The second challenge was that the language is unique and unrelated to anything else. It’s an Indo-European language – like almost every language between Iceland and India – but there the connection stops, as Armenian occupies an entire branch all to itself. While it sounds unmistakably Indo-European – I know, that’s a pretty vague description – it is like nothing else I’ve ever heard, with a seemingly impenetrable array of tongue-twisting syllable combinations.

I suppose I didn’t help myself by starting my study of the language with the also entirely unique alphabet. Created in the fifth century by the great Armenian scholar Mesrop Mashtots, the Armenian alphabet looks at first glance like it could be an Indian or perhaps Greek script. It’s rather pretty to look at, but shares virtually nothing with the Latin alphabet. 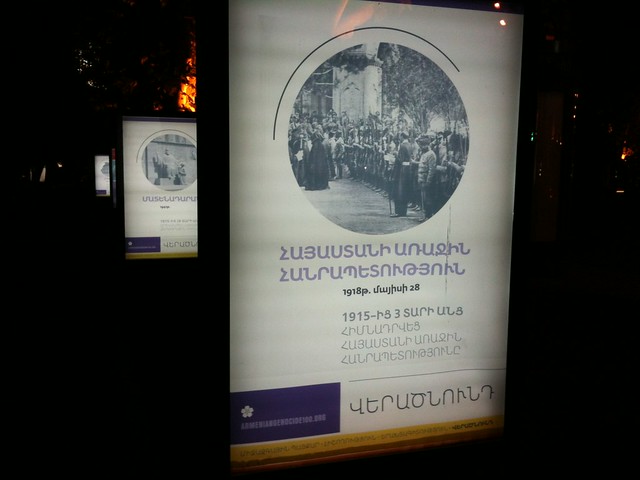 I found an app online – Memrise – which had a number of courses in Armenian, yet after a few weeks of fairly diligently learning the alphabet I felt I hadn’t really got anywhere. It was a stupid first approach, of course. Learning an alphabet in total isolation to the life and soul of a language reduces it to a mere set of symbols, like some sort of abstract intelligence test. Moreover, an intelligence test I failed. I can’t today tell you the sound behind a single Armenian character.

By the time I realised I’d gone in the wrong direction, I was too busy with preparation for the trip and had barely any time, energy or inclination to learn any phrases phonetically. And when I did try, again I failed miserably.

I managed “barev dzez“, whch is the polite form of “hello” and is pronounced exactly as it’s written. “Thank you” is also dead easy – it’s “merci“. Well, that’s not technically true. There’s a bewildering formal version, but everyone I spoke to out there said to just use “merci“, which is ubiquitous.

Folk I met in Armenia graciously waved away my apologies for having struggled to learn even the basic pleasantries, insisting that their language is very difficult. And they’re well used to speaking other languages. Thanks to the country’s Soviet past and geographical location, Russian is universal. There is considerable trade and cultural exchange with Russia itself, while dealings with neighbouring Georgia – itself also home to a unique language in a unique alphabet – are also done in Russian. English is quite common too, especially in Yerevan and among the younger generation, and it’s on the rise.

But locals were very sympathetic to my attempts to gain a few more phrases while I was there. One person very patiently tried to teach me how to say “goodbye”, a bizarre jumble of unrecognisability that includes repeated “ts” sounds. Yet even after an intense five minute tutorial I still couldn’t get it.

Well, if you can’t immerse yourself in something, perhaps it’s best to give up, sit back and just admire it. And boy, is Armenian, with its long and rich history, worth admiring.

Talk to pretty much any Armenian for more than a minute or two, and they’ll tell you proudly that Armenia (in its fourth century incarnation) was the first country to officially adopt Christianity. And, as with so many countries, religion was a key driver in the development of its written language. Christianity’s adoption was just about a century before the Armenian alphabet was created, and that provided a great outlet for this ancient nation’s creativity and deep-rooted faith. 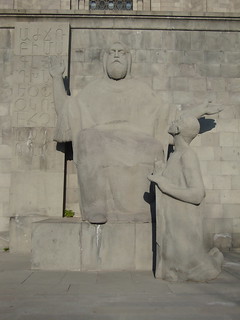 The story of the Armenian language is captured powerfully in the Matenadaran (top picture), Yerevan’s museum of manuscripts, housed since the 1950s in a striking building close to the centre of the city that wouldn’t look out of place in a Tolkien film.

Outside stands a statue of Mashtots himself, the creator of the alphabet, seated proudly with a pupil at his feet and a carved copy of the alphabet beside him. Inside, exhibits don’t date quite so far back as Mashtot’s day, but there are one or two that pre-date the end of the first millennium AD.

And that’s a matter of enormous pride for the Matenadaran, because so much of the literary heritage of Armenia was destroyed during the 1915 genocide. With countless Armenian churches and monasteries destroyed, so many rare and precious pieces of history were lost. Much of the Matenadaran’s oldest artefacts are those that were recovered from ruins or taken away as the genocide spread.

I was fortunate to receive a tour of the museum, though despite the guide’s excellent English she spoke far too fast and in a monotone that suggested a tired familiarity with her routine. It was still worth doing, however, because the pictures, displays and manuscript examples were a vivid portrayal of the language’s development, and the artefacts included old copies of the bible, codes of law and works of history, theology and philosophy. 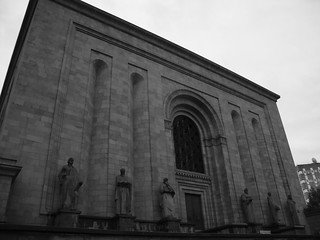 The visitor is left in no doubt of Armenian people’s literary and intellectual heritage, and this was powerfully illustrated as the museum charted the impact of the events of the genocide.

One map hammered home the widespread extent of the destruction of Armenian churches and monasteries, with many sites surprisingly (to me) far west into what we today call Turkey.

I was disappointed not to have read up more on the genocide before my visit, and while I’d heartily recommend a tour of the Matenadaran I’d strongly suggest doing the genocide memorial first to provide a more adequate context.

Having had such an enormously enjoyable experience in Armenia, and having met so many great people and learned such a lot of the country’s dramatic history, I do hope that if I ever return I’ll have some motivation to redouble my efforts to learn a bit more Armenian.

And I suppose I will have to go back some day. After all, I didn’t get to properly say goodbye…