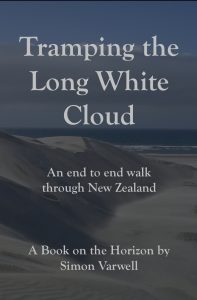 Tramping The Long White Cloud: An end to end walk through New Zealand

As the title says, an end to end walk through New Zealand.

One of my biggest frustrations in my past travels was not spending more time in New Zealand. I spent two weeks there mullet-hunting – read about that in my second book – and absolutely loved it. The country is stunningly beautiful, but when you’re rushing around with a deadline there’s only so much you can pack in.

Besides the mullet-hunting antics, perhaps my favourite parts of the trip were exploring quiet back roads in the countryside far from the cities (and often, pleasingly, surprisingly close to the cities). It made me wish I had the time to fling on a backpack and head off for a few days into the wilderness.

And with so much that I missed, perhaps I should do the whole bloody lot.

Hence an end to end walk through New Zealand. It would be a chance to take my time, dig deep, and see this amazing country at an easygoing pace. I’d not even rush it, either. Perhaps some days I’d walk many miles, in others I might meander, still others may be days for rest and relaxation. I’d have no deadline so would not need to choose or pre-determine.

The route would probably be bottom to top – just to be a bit counter-intuitive and go a different direction from how I approached things on my first trip. The South Island would force pretty much the only major choice of the trip – whether to take the west or east coast. I’d probably choose the east – it was the part I rushed the most, during which I saw very little of Dunedin and Christchurch which I would love to see properly.

Google Maps tells me that New Zealand is about 2000km long to drive from north to south, and that to walk the route would be sixteen days (I’m surprised its so few, to be honest!). But I’d want to take in Stewart Island and perhaps the Chatham Islands too, both of which sound incredible.

In some senses the book would be a sideways sequel to the New Zealand chapters of my second book, revisiting and reflecting on the locations and perhaps people that I encountered on that rushed journey in 2008. But also, it would be a fresh path – heading down the roads I bypassed, exploring the areas I had no time for.

And the key to this is taking my time, following my nose, and walking wherever I want. As I say, it’s a sixteen day walk according to Google. With rest days, easier days, side tracks and the smaller islands, you can at least double that. And because we can, let’s double it again for unexpected diversions, for emergencies, and, heck, because it’s New Zealand.

This is a trip with tremendous potential for a relatively chilled pace while still throwing up occasional surprises. It will be a laid back, hopefully interesting, journey, and that’s pretty much my favourite kind to both undertake and write about. So I’d make a good job of it, I think.

The journey and the book being defined by a real sense of peace, of openness and of freedom. This will be an adventure that will allow me to pick up little details, meet interesting people, have my breath taken away by gorgeous scenery, and be constantly refreshed by the diverse terrain that ranges from snowcapped mountains to sun kissed beaches, and from rolling farmland to picturesque cities.

The open-ended nature of this book fills me with excitement.

Not much at all. The walking will be the biggest challenge, though the intentionally slow pace makes it eminently achievable. And with New Zealand being a great country for long distance walking, there’ll be plenty provision to help me along the way, be it huts to sleep in, plentiful outdoor stores to stock up on provisions and equipment, and well-maintained paths. If you’re going to do a long distance walk anywhere in the world, New Zealand is pretty much the best place to do it.

I’d worry about the rain, even in summer, but then of course there’s all those rest days.

Time more than money is the key to this. If I stick to my rough estimate of two months – hey, let’s say three – then that’s a lot of time away. But it’ll be cheap. If I camp or stay in cheap accommodation, I bet costs could stay as low as £20 per day. Spread over three months, that’s a little under £2000, or an absolute maximum of £3000 if I include flights out there. That sounds like a lot of money, and it is, but for the length of time and the quality of experience, I think it’s phenomenally good bang for buck.

I’ve genuinely no idea. Like many of the larger adventures in this series, it’s not a journey that would suit being split up and done over a number of trips. It would have to be all in a oner. And three months off and three thousand pounds is a lot to rustle up at once.

But I like this idea more than some of the others in the series, so if I had the resources it would be nearer the top of the list than the bottom.