If you pop into the Glen Mhor Hotel on the banks of the River Ness you’ll be transported back in time. Not because it’s an antiquated place, but because in its front lounge there is an array of vintage Scottish rail posters.

They’re all, I think, prints of paintings by Norman Wilkinson, a famous landscape painter who interestingly, according to his Wikipedia page, was also renowned for wartime camouflage design and even painted a picture for the Titanic. 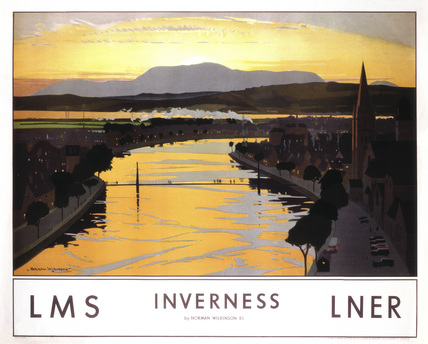 There are some particularly nice railway posters by him, including this one on the right of Inverness. I recently bought a copy of it from this website to hang up in our house.

Now I don’t buy into any misty-eyed idea of a golden age of travel. If there is one, then it’s today, with global transport and communications mixed with a still-healthy range of hard to reach and unfamiliar places.

That said, there is something appealing about the European and North American portrayal of travel in the first half of the twentieth century: the world was slowly opening up, railways were reaching their heyday, commercial air travel was beginning to (excuse the lazy pun) take off, and factors such as empire, war and industrialisation were making ordinary people aware of the diversity of places and peoples to be found across the world.

One manifestation is the emergence of some great travel writing from that era (Byron, Greene, Orwell et al), but another evocative example is how travel companies captured this spirit of adventure by means of the gorgeous Art Deco styles that were contemporary to the time.

The Highland Literary Salon meets at the Glen Mhor, and it’s sometimes hard during the monthly gatherings not to be distracted by the posters, mulling over how – before the age of truly global communications, package holidays, high-speed rail and low-cost airfares – there was a spirit of romance and adventure about domestic destinations. As Wilkinson’s posters show, you don’t need to travel to the other side of the world to have an adventure or find somewhere “remote”, and I love the way that they convey a sense of escape and exploration despite those beautiful places being, even then, relatively easily accessible from Scotland’s main population centres.

It was an interest in old travel posters that took me last week, for the first time, to the National Museum of Scotland in Edinburgh. It was hosting an exhibition called See Scotland By Train, a collection of railway posters from the nineteenth century to the modern day. It was interesting to see how the styles changed through the years, but how those of the early twentieth century seemed to best capture the sense of adventure that the railways presented.

It’s not just about Scotland, of course. On Flickr recently I stumbled across this marvellous collection of travel posters held by the Boston Public Library in the USA. Portraying locations from across the world, from New Zealand to France and China to Mexico, it is a beautiful and extensive range of posters from the early twentieth century, all conveying something of the exciting and exotic nature of travel. Here are just a few of my favourites: Of course, some of them are amusing in their dated attitudes and dependence on cliche, but they perfectly capture the era’s sense of wanderlust, an instinct that of course is alive and kicking in this era too. And its just as well, because however evocative travel posters can be, they’re obviously never as good as the real thing.

Though if they help provide that little extra inspiration and motivation to get out there and travel, then all the better. They certainly do for me.

One thought on “Travelling into the past”