Not only was our recent trip to Spain my first trip abroad for nearly two years, it was my first major trip with the iPhone.  And far from being a distraction, something that detracts your attention from the places, sights, sounds and smells you’re meant to be immsersed in, it was a real help.

For sure, with roaming switched off to save on charges there wasn’t much opportunity to be connected (no bad thing, of course), but even offline the iPhone is an incredibly handy thing to have: it’s a back-up camera, you have your contacts handy for writing all those postcards, you can scribble down bits and pieces on the Notes app, and so on.

But before leaving, I had a hunt around the App Store for a few things that might help us while we were travelling.  Here are just two apps I found helpful. 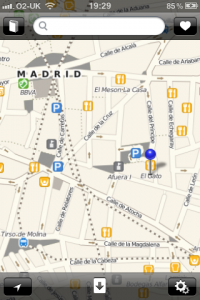 The first was OffMaps.  I figured there had to be something resembling an offline Google Maps out there in the App Store, something that could tell you where you were going without having to be connected like the iPhone’s in-built Maps app.  OffMaps pretty much met our needs. While not as detailed as Google Maps, it provided the ability to download maps of certain areas, in various levels of detail, meaning we could very easily find our way around without the hassle of out of date road atlases or unwieldy tablecloth-size road maps.

Within the cities particularly, where the level of detail was fantastic, it was a great way of keeping track of our movements while avoiding the need to stop, unfold a huge map and erect a sign saying “we’re tourists!”.  It took up a lot of memory on the iPhone, but the great thing is that you can delete entire sections of map after you’ve moved on from them, which is handy.  We had wireless internet access along the way on one or two occasions, meaning we could download the next couple of places we were visiting and delete where we’d recently been.

As I say it’s not got the full level of detail of Google Maps, but in rural areas or where you’re driving you perhaps only need a rough approximation anyway, while in the cities it was more or less as detailed as we needed.  A very handy wee app. 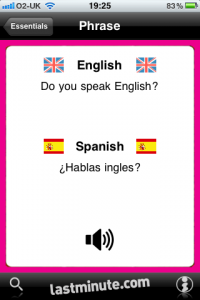 The second one I found helpful was lastminute.com’s free Spanish phrasebook – one of the better-reviewed free language apps.  It was a nifty and easy app to use, giving a wide variety of phrases across a range of categories, even providing a button to press so you could hear the phrase and learn more about the pronounciation.  This – or something like it – was essential for us as we battled with a language we knew little of between us.

The sad thing was that the app didn’t have quite the range of phrases we needed, with some obvious absences, such as the ever-essential “no problem” or the occasionally necessary “no, we’re from Scotland”.

If there’s a better (and, ideally, free) range of phrasebooks, do offer your suggestions.  And while you’re at it, dear reader (well, dear iPhone-owning reader), what are your favourite travel-related iPhone apps?  What are your recommendations worth sharing for making a trip abroad that bit easier?

It would be interesting to read your ideas.