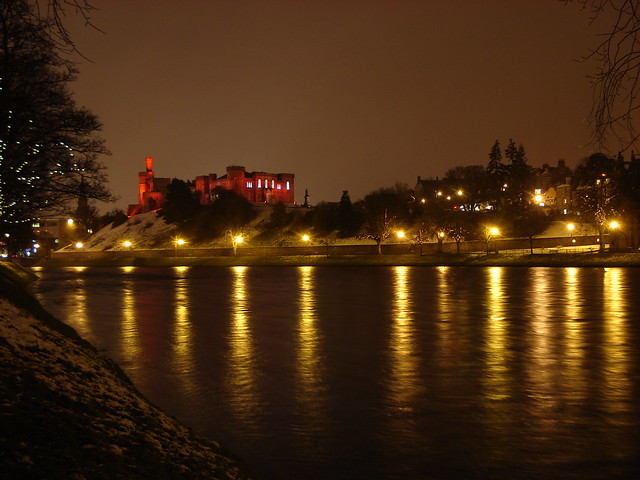 For a city of its size, regional importance and fame, Inverness has a shoddy offering of wet weather options for tourists.

Granted, one of Inverness’s strengths is that it is handy for much of the best of Scotland – Loch Ness, the Cairngorms, great walking opportunities, and access to a seemingly endless choice of beautiful scenery. And to say that the best thing going for Inverness is all the other places you can easily get to isn’t meant to be faint praise.

However the city struggles to be a tourist destination in itself – which, for the biggest settlement for over a hundred miles in any direction, is concerning. Yes it’s a great base for day tripping, but what about a day when you don’t want to travel far and simply want to take it easy? Or when the weather is miserable and you just can’t face an outdoors expedition?

When the weather’s nice, there’s the beautiful river, the magical Ness Islands, the canal, and various other lovely walks around, say, the early stages of the Great Glen Way or the forest at Craig Phadraig. But when it’s peeing it down and you need a wet weather alternative, the options are are either appalling or appallingly marketed.

The most obvious attraction on the list would be the museum, an uninspiring place tucked away out of sight in a 1960s concrete monstrosity. There’s the Victorian Market which, charming though it is, would struggle to entertain you for a day. There’s the wonderful Eden Court Theatre where you could catch a film or a play, or the small but cute Botanic Gardens (admittedly only partly indoors and some distance from the city centre). There is a handful of small-scale art shops and galleries. And a few impressive church buildings worth a brief peek if they’re open. And not much else.

Sure, there’s good shopping, reasonable cafés (though few open after 5pm), and a cracking range of restaurants, pubs and live music venues. But what if you don’t want to (or can’t) spend lots of money, or are not inclined towards booze? If spending money in high street chains you can find anywhere or getting slowly wasted in a pub aren’t your ideas of a good holiday afternoon, then I’m afraid you’ll start to get a bit bored with Inverness on your second day of poor weather.

And an important aside: I’m not counting the admittedly excellent museums at Culloden battlefield, Fort George or Urquhart Castle. They’re not in Inverness, and I’m thinking here specifically about things you can do on foot in the city itself. That’s an important distinction because Inverness cannot simply trade as a good base for the wider area – not only is its public transport unfit for the purpose, but it’s also a marketing approach that smacks of a lack of ambition and undersells the city’s own charms.

The thing is, there is so much that Inverness could do to be a great destination in itself. As the capital of the Highlands and gateway to a diverse region packed with incredible opportunities for the visitor, and with one of the finest riverside settings in the country, the city should be doing so much more. For many people visiting the Highlands and Islands, Inverness is the first port of call. To be nothing more than a forgettable springboard to other destinations is simply not on.

For starters, where is the top class (hey, just adequate would do) museum and art gallery in an aspirational, eye-catching building that is simply a pleasure to hang out in?

Where are the niche museums on important themes like hillwalking and mountaineering, Scotland’s islands, the Highlands’ literary and musical heritage, or Inverness’s fascinating industrial past, each providing inspiration for day or weekend trips to other related parts of the Highlands?

Where is the ceilidh hall or traditional music hub? Where is Inverness’s Gaelic language centre where all the city’s Gaelic agencies and organisations share a shop front; the sort of place tourists could drop in for fun, family-friendly crash courses in the language, information about other important places to visit for Gaelic culture, and pointers to the language’s history and footprint in the place names around us?

And when you think about the Highlands and Islands, one of the big things that comes to mind is food and drink. From whisky to venision to seafood, there is so much the region is renowned for. Where are the visitor centres that provide a gateway to this fabulous, famous side of Scotland?

Well, in the case of inverness’s rich history of distilling, the answer is long closed – the city’s three former distilleries shut up shop many years ago. It has always struck me as odd that Inverness has neither a distillery nor brewery – the former because of Scotland’s huge heritage in whisky, and the latter in this age of craft beer and microbrewery growth.

Which brings me to the news just the other day that Highland Council turned down an application by the Glen Mhor Hotel on the city’s riverside to build a microbrewery and visitor’s centre.

The plans the hotel’s owners had put forward were bold, eye-catching and frankly just the sort of thing the city needed. However, while some of the council’s stated concerns do seem to have some merit, so do the hotel’s complaints. As this Inverness Courier article outlines, the owner responded with a passionate open letter – one which was certainly (and understandably) over-emotional, but which had some valid points. Regarding some of the issues raised by the council about parking, the owner writes:

Inverness at the moment is lost – go on Trip Advisor and look at the top ten attractions in Inverness, then actually look at what you can do in the city itself. Other than these great opportunities, you can drink at new late licence 300 cover bars like the Exchange – with no parking. You can sleep at hundred bed budget hotels like the Penta and the Premier Inn – with no parking. You can eat at new modern riverside restaurants like the Kitchen – with no parking. You can visit a variety of Tesco stores and compare their differences. You can visit the Castle, with no amenity, no parking, and absolutely no future as a tourist attraction if the same rules are applied as they were to the brewery. What is there for people to do in the city of Inverness for visitors and locals alike?

But I don’t want to put the boot into the council too much. Members voted the way they did only within the context of existing rules, existing cultures and existing management of the city. Rather than being a cause of the city’s lack of vision and planning for tourism, the knock back of the brewery plan was probably just a symptom.

So rather than ask why the brewery was rejected, I’d prefer to ask a wider question. That is, why isn’t the city more geared to and supportive of such plans? Surely Inverness as an important city for tourism should be anticipating and encouraging developments like the brewery and any of the other ideas I mention above.

The various relevant agencies – the council, VisitScotland, Highlands and Islands Enterprise and others – should all be working on a clear vision for the city as a tourist destination of international repute, and they should be clearing the ground for these sorts of initatives: ground on to which entrepreneurs can move easily, swiftly and successfully, without having to hack their way through a perimeter of unimaginative and unprepared bureaucracy.

As I’ve said already, Inverness has great strengths in tourism, and crucially its history and geography suggest great potential to be a world-beater. It needs to figure out a way of realising it.