I’ve just had a leaflet through the door in the post about the forthcoming AV referendum. It’s from the “no” camp, and is probably one of the worst political leaflets I’ve ever seen. Even just reading the front cover got me angry:

“Keep One Person, One Vote”

…it declares. Yet the Alternative Vote is not about removing this; under AV it’s still one person one vote. Sure, in most constituencies some votes will be redistributed according to second preferences until someone reaches an overall majority, but those votes aren’t the only ones counted twice – all votes are, including those redistributed. If a second-placed candidate nudges over the 50% line because of some redistributed votes from a bottom-placed candidate, the candidate they overtake in doing so still has all their votes counted as they were before.

And as I’ve said not once but twice on this blog, FPTP doesn’t make those votes equal – your vote is much more sought after in marginal constiuencies, and is usually wasted unless it goes to one of the big parties in a seat they have a chance of winning.

All this without even opening the leaflet, and when I did so I was greeted with this angry declaration:

The cost of AV is £250 million. This referendum alone is costing £91 million. And switching to AV would cost even more:

Absolute rubbish. There are no plans to use electronic machines in the UK if AV is adopted, and it is easy enough to count by hand, just like FPTP. Moreover, how dare the No camp complain about the cost of the referendum? The cost of administering and holding the vote is not a reason to reject either of the options asked in it. It’s an entirely separate issue from the rights and wrongs of holding it. And as for £26 million on explaining the system, I have no idea where this figure comes from – people are learning from the referendum campaign how to use it, and of course millions of us already use it for internal trade union, students’ union, political party and other community organisation elections. It’s hardly an unknown quantity in this country so I am sure it shouldn’t be that expensive to bring everyone up to speed on how to put a 1, 2 and 3 next to their preferences. 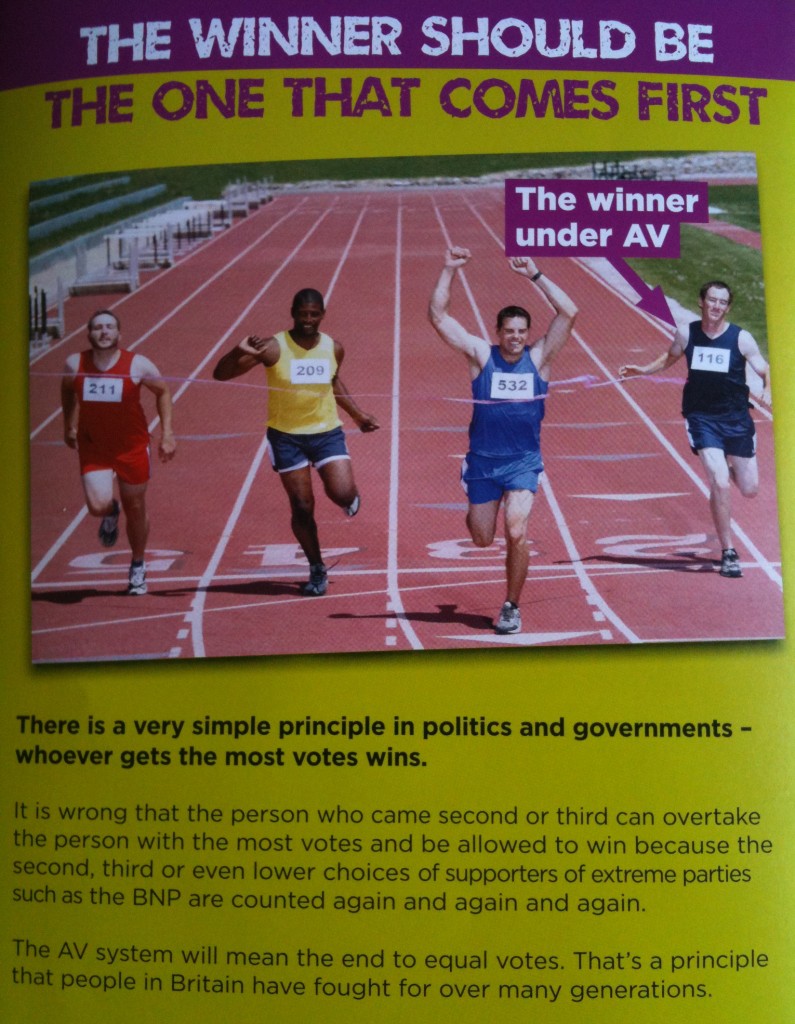 Another page in the leaflet tells us that “the winner should be the one that comes first”, with a picture of four athletes crossing a finishing line and a sign next to the second-placed runner saying “the winner under AV” (see right).

Utter lies. Yes the winner should be the one that comes first, but crossing a fixed finishing line by achieving a majority backing is what should count as winning in elections, and there’s nothing to suggest that by redistributing the fourth and third placed candidates, the winner of round 1 wouldn’t still win – and indeed have their legitimacy strengthened.

It is wrong that the person who came second or third can overtake the person with the most votes and be allowed to win because the seond, third or even lower choices of supporters of extreme parties such as the BNP are counted again and again and again.

Take the classic – though admittedly unusual – example of the 1992 General Election result in the Inverness East, Nairn and Lochaber constituency, where the winning candidate, Russell Johnston, got only 26% and only 3.4% seprarated the top four candidates. If Johnston was broadly popular in the area, and most of the other candidates’ supporters could just about stomach him as their MP, then fine. But imagine if he had been utterly despised by most supporters of the other three parties – under FPTP they could have done nothing about it, but under AV they could have given each others’ candidates their second and third preferences thus keeping a divisive and unpopular candidate out.

This is precisely why the introduction of AV is bad news, not good news, for the BNP – pretty much everywhere the BNP stand, the voters for all the mainstream candidates will almost certainly give second or third preferences to each other, leaving the BNP stranded. And if the BNP are first to be knocked out, their votes don’t retain the same toxic weight if then redistributed to other, inevitably more mainstream, candidates.

Other arguments in the leaflet include the fact that AV is unpopular, used in only three countries in the world; ignoring the countless uses within the UK as I stated above, and ignoring the fact that FPTP has not been adopted in the last thirty years by any new democracy for its legislative elections. And then there’s the odd argument that AV is not what the Scottish Parliament uses (as if that alone is a reason!) and that we already have 5 voting systems in the UK, so why have another? Well, I can only count four (FPTP for Westminster, AMS for Holyrood, STV for councils (in Scotland, anyway) and the regional list for the European Parliament. So if we adopt AV that’s still only four: swapping one we currently use for one we don’t doesn’t actually increase the number of electoral systems in use.

But easily the two most depraved arguments revolve firstly around Nick Clegg. The leaflet tells us that the referendum is only happening because “Nick Clegg demanded it in the coalition negotiations last May” and that Clegg is pushing for AV as a means of benefiting the LibDems who face electoral catastrophe after their broken promises, and that, it is argued, would give the LibDems extra strength in parliament and thus perpetual hung parliaments where the LibDems play kingmaker.

Rubbish, and yet more rubbish. Party politics should be separate from this, and whether or not you hate Nick Clegg should bear no influence on this, because the system we end up with after the referendum will long outlive the political career of Clegg or indeed any politician on the go today. So what if he’s betrayed his voters? That’s a reason to influence your vote in the next UK general election, not a reason to influence your vote in a referendum on our voting system. Anyway, it’s been shown (1|2|3) that AV would lead to hung parliaments no more often than FPTP; that Australia, which uses AV, has had less hung parliaments than us; and that past UK elections such as the 1997 and 2005 Labour landslides would actually deliver greater parliamentary majorities than FPTP did.

The other most depraved argument is the seemingly jingoistic sentence:

The AV system will mean the end to equal votes. That’s a principle that people in Britain have fought for over many generations.

Really? Who has ever genuinely, literally, fought for the principle of equal votes? Democracy, yes; freedom, yes; universal suffrage, yes. But something as psephologically technical as equal votes? I don’t think so. Unless of course the No campaigners are inexorably linking First Past The Post to those principles of democracy, freedom and universal suffrage. I’m no historian but I am pretty sure that our armed forces have never fought and died for FPTP in the way they have for democracy. WW2 was not about the threat to our electoral system, it was about the threat to our… well, our everything. To use the kind of language that evokes the spirit of Churchill and the Blitz, as if FPTP was all that stands between us and the end of the world as we know it, is warped, insulting and desperate.

I’m going to stop now, before I wind myself fully up. I genuinely don’t mind a good, heated political debate if it is about the key principles and issues at hand. In fact, I love nothing better. Well, almost nothing (those really nice wasabi peas you get in Marks and Spencer are probably better than a good, heated political debate, as is a nice, smoky Islay malt, but you get my point).

It just gets my goat (gets it, slaughters it, roasts it and turns it into a delicious meal, in fact) when the No campaign in this referendum attempt to win by peddling inaccuracies, lies, fallacies and the most dirty tactics you could imagine (unless you have a much dirtier imagination than me, of course, and if so I don’t want to know, thanks).

And incidentally, please don’t think I’m the only one angry with the No2AV leaflet – a cursory Google search suggests others (1|2|3) felt the same as soon as they picked it up off their doormat too.

To sign off, I’ll leave you with a link to my friend Phil’s blog, Evil Flea, where he combines commentary on the absurdity of the No campaign with his great cartoons.

8 thoughts on “The lies of the anti-AV leaflet”