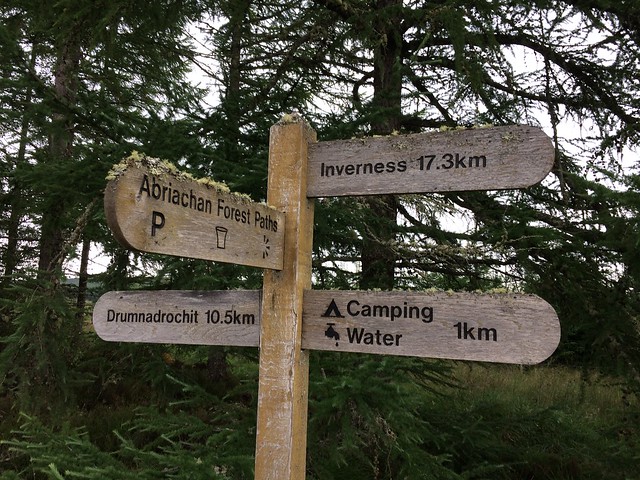 It’s been a long ambition of mine to walk from Inverness to Drumnadrochit, the first twenty or so miles of the Great Glen Way that snakes its way southwards to Fort William. It’s a walk I’ve looked at often on the map, walked the first few miles of many times, and which has even formed part of the basis of one of my imagined travelogues.

For me, one attraction of a walk from Inverness to Drumnadrochit its simplicity. Walking is the most straightforward mode of transport: you just put one foot in front of the other, transfer your weight forwards, and repeat.

It’s what the human body is designed for, and it’s also the cheapest, healthiest, safest and most liberating way of getting from A to B. You can go more or less where you want, when you want, for minimal cost. You don’t need to do a warm up or get in shape, because walking itself is the warm up. The equipment you need is not a huge amount more than what you need in everyday life. Refuelling is simple, and the vehicle self-repairs after most of the common forms of wear and tear.

A second draw to doing the Great Glen Way – or at least that first stretch from Inverness to Drumnadrochit – is because for me it is so easy to start. The beginning of the route (or end, if you’re starting in the south) is at Inverness Castle, not far from where I live. All I need to do, I have kept telling myself, is just pick a day and go for it.

Eventually, I did just that. A couple of weeks ago my wife Nicole and I cleared a day in the diary, packed some fruit and snacks, and headed off into the sunshine.

Well, I say sunshine. It was towards the end of the ridiculously hot spell that we’ve had this summer, but the clouds hadn’t quite broken. It was, as a result, muggy and humid, and less than ideal for walking. In fact, it might have been nice to have had a bit more than the couple of very light showers that we had.

The first stretch of the walk to Drumnadrochit is a walk I’ve done many times – along the river and canal and up through Craig Dunain until you eventually get some good views back across Inverness.

From there, you walk on a good path along the ridge of the hill, trees on both sides, for a long time. In one sense it’s a boring part of the walk – nothing to see but trees on either side, apart from the occasional glimpse of the Beauly Firth, and I’d always turned back around this point. 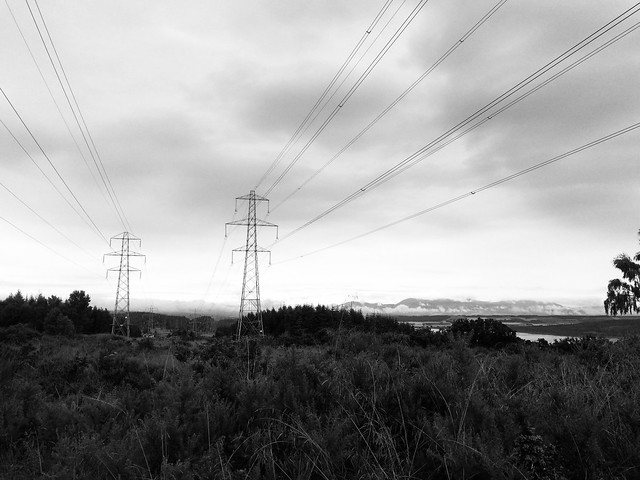 But of course today we pressed on, and soon broke out of the trees into a more barren landscape, one that sadly didn’t quite inspire or take the breath away – the route is annoyingly devoid of loch views for most of the way – but was certainly a fresh change from the closeness of the trees. It was also perhaps the easiest stretch. Having got the worst of the walk out of the way early on (the steep climb up to Craig Dunain), it was pleasing to get the miles under our belts as we powered along a good path on more or less entirely the flat. 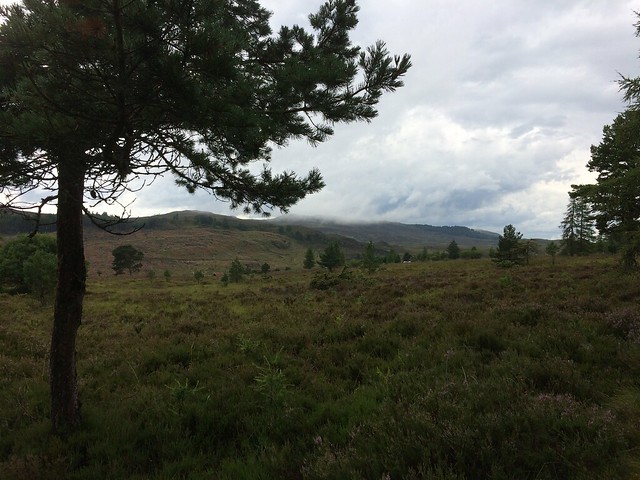 From there, the forest path soon joined a single track road, which we followed – almost traffic-free – to Abriachan, where the route snakes through the forest once more and beautiful wooden signs tempt you (well, they certainly tempted us) to the Abriachan Eco-Campsite and Cafe. After some delicious tea and cake (be warned: it’s expensive. They are not on mains water, so water needs to be bought in), it was onwards once more. 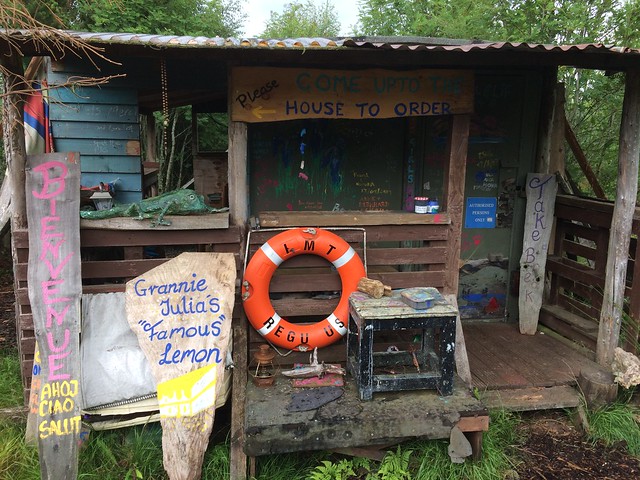 Fueled up, we got more miles under the belt, and after some slight undulation eventually struck sight of the elusive Loch Ness and began to descend towards Drumnadrochit. 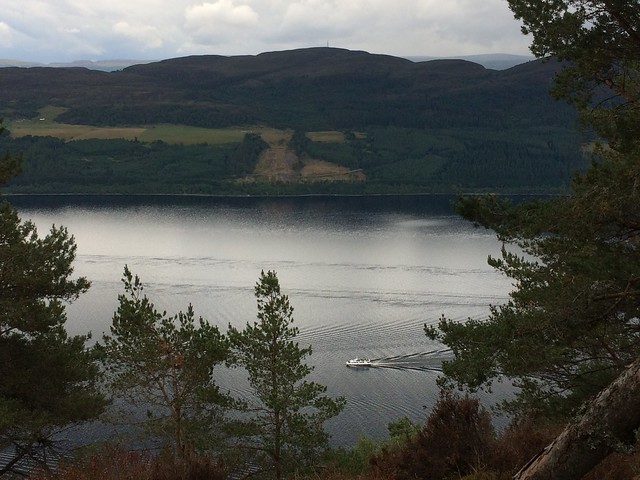 It was a relatively sharp drop down through the trees, and around nine hours and over twenty miles after leaving home, we made it. 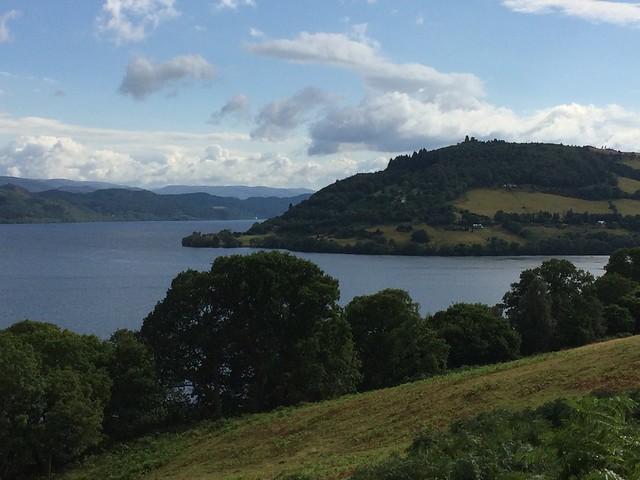 We were glad to have made it more or less in one piece, and it was an achievement finally ticked off my adventure wishlist. It was a good walk – challenging but interesting, and as the longest stretch of the Great Glen Way it means any further legs I might choose to do will be more manageable than that first part.

As I say, though, the walk wasn’t quite as pretty as it could be. Obviously walking routes are constrained by practicalities – geography, land ownership and so on – but it is surprising how underwhelming this walk is visually. It’s enclosed by trees for much of it, there are few good views of the loch, and those parts of the route where there are views are often barren rather than rugged.

But while my abiding memory of the walk wasn’t the scenery and landscape (to be fair, I know it so well I probably had a bit of local blindness to it), what really stood out was the human side. We probably only passed around twenty or thirty others on the walk – a mix of Scottish and other nationalities – which surprised me as northbound is the more common approach than our southbound trek. But in the vast majority of cases we all stopped and chatted, keen to exchange reports on what lay in store for each other. And with none of our encounters being with locals, we were able to offer quite a bit of information about routes, facilities in Inverness and so on. From charity cyclists to plain old-fashioned walking holidayers, it was reassuring to see a form of solidarity with our fellow travellers, a desire to help each other out, offer advice, and give some light encouragement.

It’s inspired me to get out more on big long walks. It’s been a while since I have done anything of that length, and I was pleased to have survived it relatively unscathed apart from a few days of serious aches. For all my unfitness, I can certainly walk. It is, again, such a simple form of transport.

It’s not long since I’ve seen the South Loch Ness Trail being in the news for finally linking Loch Ness on its opposite, less touristy (and, to me, more interesting) side. Perhaps that should be the next adventure.