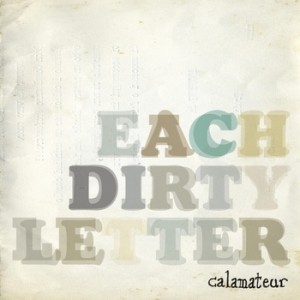 A while back I had the privilege through a mutual friend of meeting Andrew Howie, otherwise known as singer-songwriter Calamateur.

Based in the highlands, Calamateur has churned out an impressive array of songs over the years, and I was lucky enough to be paying attention when it was announced recently that his entire back catalogue available for download for free on his website.

With a very few exceptions, I am not generally a fan of singer-songwritery-type stuff – it’s a bit too soft and cheerful for my ears.  The excellent Malcolm Middleton is one of those exceptions, delivering stunning poetry packed with acerbic humour and a poignant reflection on the dour side of love.  Calamateur’s music is more cheerful than Middleton’s (that’s not difficult, to be fair) but is just as poetic and beautifully captures all the moods, issues, beliefs and places that surround him.

Each Dirty Letter, his most recent offering, delivers on these facets to the max and is definitely his best so far.  What strikes me first about Calamateur on this album is his gorgeous voice – soft, smooth, but versatile enough to be both gentle and powerful, in a Thom Yorke sort of way.  Next to strike me was the beautiful lyrics and catchy music, and these are in evidence right from the start.

Change This World is a great opener, with single Banoffee standing out as a great signature song of the album, a sweet love song about how it’s the imperfections that make love so strong.  They’re followed by the haunting duet Retreat, which like many of the subsequent songs mixes energy with introspection.  It’s not all softly-softly, however, with the album getting energetic and loud later on, with City Is Mine being pretty much a conventional rock song (and a good one at that).  The album remains strong towards the end, with A Bad Friend being a particularly powerful ballad, and A Crumbling Empire being a great finish.

It’s a lovely album, and while I doubt I’ll throw myself much into the wider genre I am sure that like Middleton the works of Calamateur will continue to get under my skin.  Each Dirty Letter is a highly recommendable album – it’s on iTunes but what’s even better is that on his website you can download it and pay whatever you like.