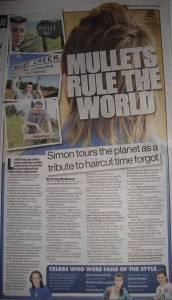 If you found yourself in the passenger seat of a white van today, in Scotland at any rate, you’ll have inevitably found yourself reading the Daily Record, and would have stumbled across this article on page 8.

It’s a great article and I reckon my publisher will be delighted with the publicity.  The book appears to be out in shops and online, despite not being formally launched until Monday, because Amazon customers have received their copies and a handful have even appeared on the Amazon marketplace, which either means the book’s rubbish and folk have put it up for sale, or keen entrepreneurs have found it somewhere for bargain basement prices.

The interview with the Record yesterday was good fun, and really quite refreshing.  In past interviews, when folk have been interviewing me about the mission generally, I’d understandably be asked the same stock set of questions – why, when, where etc – and I would find myself slipping into an automatic spiel, rarely saying anything that was (to me at least) original or new.

Craig, the journalist I spoke to, however, had read the book and we had a really good chat about the events of the book and what might lie ahead in the future.  It was thought-provoking to be asked questions I’d not been asked before by someone who clearly had taken time to absorb and think about the book.

The launch is in two days.  I’d better start thinking about which extracts I want to read…