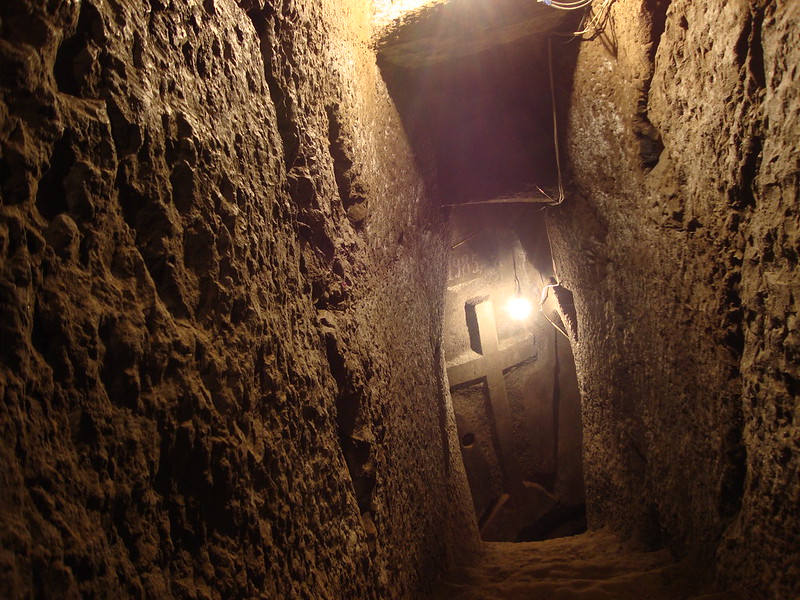 Many years ago when working in Russia, an Armenian man by the name of Levon Arakelyan had a message from God. God told him that one day he, Levon, would perform a miracle.

Some time after that in the 1980s, when he had returned to the family home in the north of Yerevan, Levon had a message from another source of great authority: his wife. She wanted him to dig a hole under the house in order to keep their potatoes cool.

And he kept on digging.

He dug for over twenty years, until his death just a few years ago.

He dug because he felt driven, guided by God. Literally – he would receive messages to dig this way, that way, to the left, to the right… deeper and deeper. It became his obsession, his life, his mission.

When first researching Armenia prior to my two visits, Levon’s cave stood out above all. I can’t remember how I first discovered it, and there are not too many references online to this obscure and intensely personal attraction in Yerevan. But I knew that it was mad enough and amazing enough that I had to visit it.

On my second trip, in November of last year, I finally had some free time to go exploring and try to hunt it down. According to what little information I could find online, tracking down Levon’s house was dead easy. You needed to simply ask a taxi driver to take you to the district of Arinj in the north of Yerevan, and then just ask around – everyone in Arinj apparently knew where Levon’s house was.

I should have guessed it would not be so simple. It’s not a long drive out of town to Arinj, northwards along a good motorway, out of the central district, past lots of apartment blocks and some plush houses, past some big hotels and Yerevan’s zoo.

“This is it, this is Arinj,” said our taxi driver to my Russian-speaking travel companion. We were in a scene that could have passed for anywhere in eastern Europe: concrete everywhere, dusty and potholed side streets. We’d pulled up outside a small shop, and that seemed the best place to start.

My bemused companion, who quite possibly didn’t entirely believe either the incredible story or the vague, too easy instructions, asked the shop staff if they had heard of the place. They hadn’t, and were utterly bewildered. He translated my story about the man who had dug a hole under his house to put potatoes in and now it had become an internationally-famous museum. That didn’t seem to ring any bells.

A woman introduced herself in English and asked if she could help. We repeated our story in English. No, it turned out she in fact could not help.

If these people had not heard of Levon’s cave, then frankly nobody round here was likely to, and our only other solution of just stopping random people on the street seemed utterly futile.

With us now both wondering if the whole thing was an elaborate national in-joke, an Armenian equivalent of the four-legged haggis that runs around Scottish mountains, there was literally nothing else to do but head back into the centre of town. I can’t remember what we did with our newly clear afternoon.

Thankfully I had a chance to regroup, re-plan and re-execute. Not long after, I was able to catch up with some of the city’s Esperanto-speaking community. One of them kindly took it upon herself to do some research for me. She and another offered to join us on a second attempt later in the week.

Long story short, the trick is not to head to Arinj and ask around: it’s to head to the seemingly entirely different but – as far as I could make out – very close by district of Avan-Arinj. 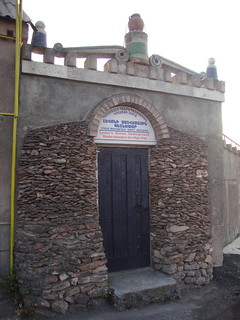 As the minibus we’d caught disgorged me, my travel companion and our two Esperantist saviours on to a bland, busy main road of garages, shops and houses, it was a quick chat with a nearby taxi driver, a short drive down some narrow side streets and we were there: at the neat but unprepossessing home of Levon’s Divine Underground.

I was glad to have local Armenian help as we knocked on the unassuming door, identified as its hidden purpose only by a modest sign above it.

However, I needn’t have worried. Inside was not just the Arakelyan family home of course but a museum very well set up for international visitors – you can even find it on Facebook.

Family-run, the museum is, essentially, a tour of the amazing cave network, a look at the peaceful garden containing a mural of Levon and his wife, and a look at some exhibits in the final room – the family’s living room. 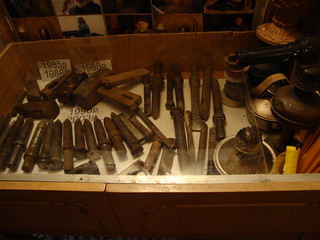 We were guided on our journey through this unusual experience by Levon’s granddaughter, Nune, a student of Spanish at one of the local universities and a speaker of flawlessly fluent English.

I’ll not beat about the bush: the caves are astonishing. Possibly one of the most breaktaking and mindbending things I have ever seen.

The cave network is seven storeys deep, cut through the soft tuff from which much of Armenia’s buildings are constructed, as well as, astonishingly, through, er, rock hard basalt. There are beautifully smooth walls. Neat staircases. Peaceful shrines. Ornate carved crosses. 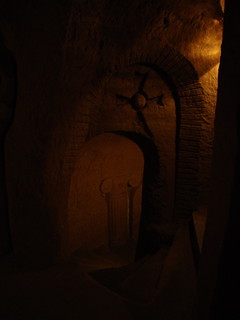 And let’s remember that this was all done by one man. By hand. No help, no fancy tools (the chisels employed, some donated over the years by supporters, are viewable in the museum).

No nods to modern technology, with the exception of the electric lights strung along the way.

It was done in no public spotlight, beyond the odd magazine article pinned to the living room wall, where one can see pictures of Levon himself – a modest looking man with a warm face and what looks like the permanent beginnings of a mischevious smile.

It was done to no national acclaim or formal accolade (more’s the pity – a statue of Levon built from rock taken from his own endeavours would be a fitting tribute to this incomparable achievement). 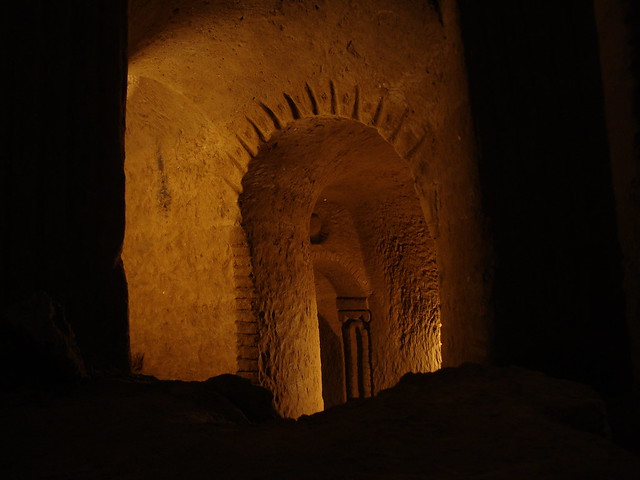 In a sense, though, the reasons why Levon chose to keep digging don’t matter, and I’m not sure I’m particularly curious about them. He was, after all, following a divine calling.

For those that believe in divine callings, that’s more than enough reason. For those that don’t, well, the explanation will never satisfy. Except to say that, through those decades of devoted labour, this one man, Levon Arakelyan, has created nothing less than a unique testament to hard work, determination, conviction and devotion to one’s life mission.

It is also, it surely goes without saying, absolutely unmissable should you ever find yourself in Yerevan (and if you don’t, please “like” them on Facebook).

Levon’s Divine Underground is inspiring, breathtaking and beyond comparison. It is pretty much, just as God’s message foretold all those years ago in Russia, a miracle.

And I can only assume that the potatoes in the Arakelyan household are the best in the country. 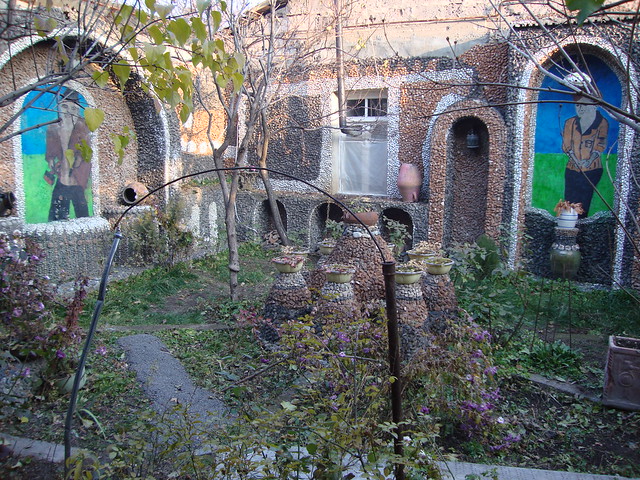