The centrepiece of my week in Knoydart was a day’s climb of two Munros in the area, Luinne Bheinn and Meall Bhuidhe, two impressive mountains that make for a fantastic long circular walk – albeit a gruelling trudge from the “city centre“.

What made the day extra special was the phenomenal weather, with blue skies for most of the walk and enough warmth – except on the summits – for just one layer. The good visibility helped give a real sense of perspective, illustrating the huge size, rugged beauty and breathtaking emptiness of the region. Our group met barely a soul all day, with occasional wildlife the only notable company.

Heading out from Inverie we cycled the first stretch along a reasonable path and turned off just past the Brocket Memorial (more on that in a later post). There we dumped the bikes and soon began our ascent. The great views quickly began to appear, with rich blue rivers and lochs towered over by range upon range of mountains.

By the time we hit the first of our two summits, Meall Bhuidhe, we could see for huge distances, the map stretching out before us and taking in much of the West Highlands, the Inner Hebrides and beyond. 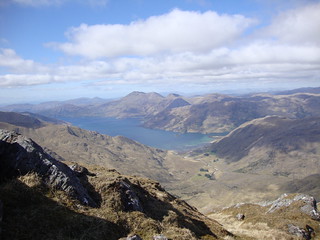 On our second summit, Luinne Bheinn, we were rewarded with a spectacular view of Barrisdale Bay (right), and suddenly a couple of geographical nuggets clicked into place in my head.

This was actually my second time in Knoydart. The first time was well over a decade ago. That time, rather than take the boat from Inverie, a friend and I spent four days walking to Inverie and back again by the overland route from Kinloch Hourn.

The midpoint of that walk is Barrisdale, where there is a bothy for an overnight stop, an occupied house, and not much else other than wilderness. I could now see, and be reminded of, that walk, and I could see the route we would then have taken from Barrisdale, passing in the shadow of Luinne Bheinn as we approached Inverie.

Although the photos do not quite portray it, the wind was high and the cold was biting, so we quickly descended once more into the relative warmth and soon joined the track I took into Inverie all those years ago.

A long, flat march is always an anticlimax after such a beautiful hillwalk, but it was a chance to reflect on the beauty, stillness and emptiness we had encountered and be glad that the weather had been so kind. The fact that the area we passed through was so depopulated was, of course, not exactly due to the most pleasant of circumstances.

Check the links at the top of this post for the rest of my Knoydart posts and photos, but see just the pictures I took of this walk here.