Heading into Inverie for the first time on the boat from Mallaig, two objects stood out for me against the lush green hills and rugged mountains.

The first, and more obvious one, was a striking statue on our left as we travelled, the north shore of Loch Nevis, that appeared to be a figure with arms aloft – perhaps something religious.

The other, less clear until you approached Inverie, was a small stone construction towering over the village, seemingly part-way into the hills.

My interest piqued on both fronts, I told myself I’d visit the two of them before I headed home. 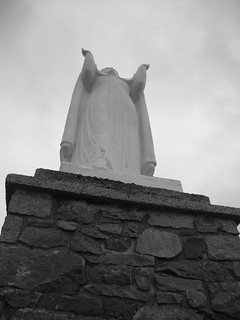 Although neither were especially far from Inverie, the trickier of the two to reach was the statue, which I learned was of Mary, mother of Jesus. There are references online to it being called the “Plastic Mary”, due to it being made of fibreglass (or glass reinforced plastic), though I didn’t hear anyone refer to it as such during my time.

It stood on Rubha Raonuill (“headland of Ranald”), a modest summit overlooking the entrance to Inverie bay, and a short if slow-going walk past the very end of the road west from Inverie, across some sands, and up a steep hill thick with heather and bracken.

References to the statue online are curiously scant, so it is hard to find any details about who built it, when and why (not to mention, in this hard to reach spot, how). And I find that odd as, up close, you can clearly see it is a reasonably recent creation.

But in a way the Madonna’s vantage point and pose speaks for itself – as she surveys the entrance to the bay, clearly visible to all who pass by below on the water, it is, like so many pieces of religious architecture, a stance of confident worship, a gesture to God’s supremacy, an indication for all to see of who this land belongs to. 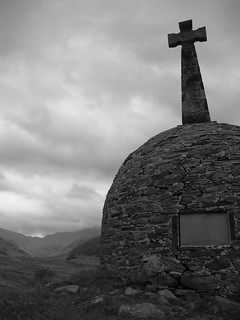 Which is ironic given the very difficult issues in Knoydart’s past about who, at least in the earthly sense, the area has belonged to. And that leads me to the second thing I saw, which I learned was the Brocket Memorial, standing not far from the path that leads out of Inverie towards Luinne Bheinn and Meall Bhuidhe, and ultimately Kinloch Hourn and the main road network.

I passed it on my walk out to those two peaks and then returned for a closer inspection on a later day.

The Brocket in question was Ronald Nall-Cain, the 2nd Baron Brocket, an English landowner and aristocrat whose title was actually created by his father. Brocket Junior lived during the Second World War and was a noted Nazi sympathiser.

As if that wasn’t bad enough, he bought the Knoydart Estate in the 1930s and was a dreadful landowner, boosting its shooting and fishing at the cost of any prospect of sustainable communities. He was also in charge during the failed land raid by the Seven Men of Knoydart.

Hardly the sort of fellow you can imagine a grateful tenantry wanting to erect a statue to, but in the absence of popular acclaim the next best thing is just to build it yourself. Albeit that Brocket built it in memory of his family rather than himself – but that seems a mere technicality.

The plaque on the statue includes a quote from Psalm 121:

“I will lift up mine eyes unto the hills, from whence cometh my help. My help cometh from the Lord, which made heaven and earth.”

It’s an ironic choice of Bible verse for a structure in Knoydart. The psalm, a prayer for protection, goes on:

“He will not suffer thy foot to be moved: he that keepeth thee will not slumber.”

Well, tell that to the hundreds of nineteenth century residents of Knoydart whose feet very much did move and who very much weren’t kept, as they were cleared from the land by those whose legacy Brocket perpetuated.

Maybe that explains Plastic Mary’s raised hands. Perhaps it’s not worship at all, but rage.

2 thoughts on “Plastic Mary and the Nazi sympathiser”