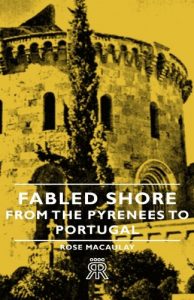 To my shame, I’m previewing June’s book over halfway into the month and very nearly halfway through my reading of it.

I’ve been pretty good thus far at keeping on top of my previews and reviews for my Reading Female Travel Writers series, so I hope this is not a sign of a laziness creeping into my approach.

June has been a hectic month on a number of fronts, which has prevented me catching up on writing as I would have hoped, so for the purposes of this belated preview I am trying to forget what I’ve read and imagine I was writing it just as I started out on it.

Fabled Shore: From the Pyrenees to Portugal by Rose Macaulay was recommended to me by a Twitter contact, the travel journalist and Spain expert Annie Bennett who responded to my appeal for titles late last year.

Fabled Shore by Rose Macaulay about travelling around the coast of Spain & Portugal – first published in 1949!

And as you’ll see from our subsequent conversation, I noted that I had been finding a lot of books for the mission that had been written a long time ago. In my preview of January’s title, the only anthology of the series, I dwelled on the fact that many writers in the book had lived in the eighteenth and nineteenth centuries. Meanwhile February, August and December’s titles all were written before my lifetime.

Annie went on to say:

Amazed that I can't think of contemporary travel books by female writers though!

It’s certainly reassuring to note that others have struggled to think of modern female travel writers, again serving me reassurance that this mission is a good thing, in terms of raising the profile of female travel writing generally but also hopefully the more contemporary names on my list.

So that was one reason why I was glad to take Rose Macaulay’s book on board. Another related to its subject matter. Macaulay wrote her book after a 1948 journey down Spain’s coast, from the Catalan coast southwards and round until she hits Portugal. 1948 is an evocative time for Spain – just a few years since the country’s bitter civil war, and when Europe was slowly, somehow, picking itself up after World War 2. It’s a time recent enough to still be casting a shadow over our lives today, but long enough ago to feel like a different era.

And Spain is a country I am keen to know and read more about. I’ve only been to the country twice. Last year’s brief work trip to Madrid hardly counted, though 2010’s road trip was a fuller experience. There’s obviously something enigmatic about Spain for me that I have never turned those trips into blog posts. Time and creative juices have always conspired against me, though I still hope I’ll be able to do something with them, and I am especially proud of my 2010 trip’s photo set.

That 2010 road trip differed from Macaulay’s journey in two big ways among many others. First, there were over sixty year separating our journeys. So much will have changed, yet, perhaps, so much will be familiar. Second, my journey was very much through the parched, desert interior, away from the coastlines that are so famous for British tourists. Fabled Shore, however, as the name might gently hint, is a coastal journey. What would Spain’s coast be like in the 1940s? Would there be any hint of the vomit-stained horror that package holidays and cheap flights have wrought upon the country’s Mediterranean coast in recent years? Would the story be a poignant depiction of a rustic charm totally lost today?

Those were some of the thoughts I had in my mind as I commenced reading, and (spoiler alert) they’ve remained at the forefront of my thinking as I’ve progressed through the book.

Fabled Shore is a hefty tome (even on Kindle), and Macaulay’s writing is rich and deeply-researched. So I realised from the outset that this would be no easy read, though hopefully, with perseverance, a rewarding one.

And we’ll soon find out. In fact, I’d best draw this preview to a close because, after all, the review will be due in a few days. Time to crack on with the reading…