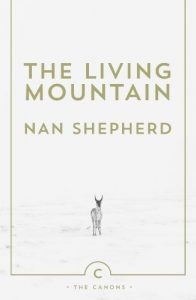 Well, here we are. Or here I am, to be precise. Nearly at the end of my mission to read only female travel writers over the course of 2017.

I’ve been looking forward to the last month of the mission, because there was quite a gem awaiting me. Nan Shepherd’s The Living Mountain, a book about the Cairngorm mountain range just down the road from me here in Inverness, is a book I’ve heard plenty about.

I can’t remember who recommended The Living Mountain to me at the start of my mission. Quite possibly it was nobody in particular but as I scouted around for titles to include I maybe became aware of it and decided to include it. I am sorry I did not note this at the time.

But you don’t have to go far to find people raving about it, and one of those is the nature writer (and great follow on Twitter) Robert Macfarlane, who provides a helpful introduction to the copy of The Living Mountain that I am reading.

Perhaps because the mission was going to take me all around the world, perhaps because it is so nice to read others’ perceptions of the familiar, and perhaps because one of the best parts of travel is coming home at the end, I knew I wanted to finish with something Scottish. There was a Scottish flavour in the mission already, with Kathleen Jamie’s Among Muslims in May, but The Living Mountain is of course not only by a Scot but set in the country too.

And the Cairngorms are an amazing part of the world. I have been plenty times to various corners of this huge (by our standards) range, at all levels too – from gentle forest walks to windswept summits. It’s an area I love, but really don’t explore enough. So maybe my first test for The Living Mountain is whether Shepherd encourages me to get down to the Cairngorms a bit more myself.

A second question I have about this title is around the idea of nature writing. As with some of the other titles, there have been some fuzzy boundaries with the concept of travel writing. Some of the authors I’ve taken in this year have strayed (enjoyably) into adventure writing, outdoors writing and biography. And this one is definitely in the realm of nature writing. Of course it’s travel writing in a broader definition – by definition one has to travel to explore a mountain range – but perhaps I will have to get used to the company of only the author, rather than people or cultures.

I will find out. I’ve already got a hint from Robert Macfarlane’s introduction of the thoughtful and beautiful language I have waiting for me. Indeed, he’s just replied to a tweet I sent him to describe the book as “miraculous”.

You’ve a miraculous book ahead of you, Simon.

His preview is a helpful one. He explains more about the book’s history and production. It was written towards the end of the Second World War but lay in a drawer until the 1970s when eventually, somehow (it doesn’t appear to be clear), the book was pubished. From there, and despite the author’s modest and unassuming life, the book became a quiet hit, a bit of a cult classic in nature writing.

He then goes on to rave about the book’s many qualities in a way that I might have managed without, because it is the sort of book that sounds like it will speak for itself. But he does add value in explaining the book’s story and introducing the Cairngorms to any readers who don’t know the region. And – with a nod to my mission’s point – he makes the important point that:

Most works of mountain literature have been written by men, and most male mountaineers are focussed on the summit: a mountain expedition being qualified by the success or failure of ascent. But to aim for the highest point is not the only way to climb a mountain, nor is a narrative of siege and assault the only way to write about one.

This is a suggestion of the distinct perspective that Shepherd as a woman will bring to this book, and one that – as an occasional hillwalker entranced as much by journeys as by summits – I think I will welcome.

The Living Mountain is a short book, about one hundred pages. So I expect this is one I will be able to savour and enjoy, rather than – as I have at times this year – feel burdened by the need to progress through.

I shall, as ever, and for the final time in this mission, report back with a review once I’ve finished.