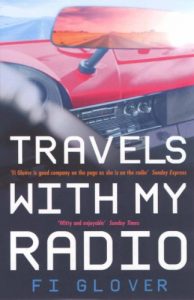 In my university days, for reasons I can’t really remember, I listened to Radio Scotland quite a lot. Back then – I’ve no idea about now – it switched off at midnight and the frequency was handed over to the BBC World Service.

That made late night listening something of an adventure, as I could imagine myself sitting somewhere – anywhere – in the world, listening to the voice of the BBC as many emigrants, travellers and others thousands of miles away would do.

Then, towards the end of university, Radio Scotland began switching over to the twenty-four hour news and sport channel, BBC Radio Five Live. On weekdays, the late night show I suddenly found myself thrust into the midst of was a jaunty, lighthearted chat show presented by Fi Glover.

I was quickly drawn in by Glover’s chirpy manner and cheerful, sideways look at the news heavily peppered with audience interaction. Before long, I was abandoning Radio Scotland and listening to Five Live throughout the day too, and enjoying the whole of Glover’s 10pm to 1am show.

Over the years, that slot was filled variously by Matthew Bannister, Anita Annand, and the simply superb Richard Bacon, and although each of those presenters brought their distinctive personalities to the show, the formula was, on a fundamental level, the same: switching gear from the non-stop news and analysis of the daytime to a more laid back, often cheeky perspective on the day’s stories, with entertaining guests, refreshing humour, and a heavy reliance on the weird and whacky contributions from listeners, such that listening felt to an extent like a being part of a community.

That, I suppose, is radio at its best – delivering whatever it is you want, be it news, sport, music or whatever else, in a way that is not merely a one-way transaction but drawing you in and making you love it and feel a part of it.

I don’t listen to the radio late at night so much these days, though Five Live – with frequent diversions to BBC 6 Music – is still my station of choice. I do however look back fondly at those fabulous midweek late night shows, and especially to Fi Glover who I suppose I can say got me into Five Live.

So when my friend Justin suggested her book – of which I had never heard – as an option for my 2017 reading challenge, I was determined to put it on the list.

I’d not really followed Fi Glover’s career since she left Five Live – that’s the fickle nature of radio audiences – but apparently she had gone on to work on the BBC’s Travel Show, a gig that had, obviously, taken her all around the world. When that ended, she wrote this book (it was published in 2001) as a chance to return to a medium of broadcasting that, as she explains, she absolutely loves.

The book in essence is about her travels across the world through the medium of radio, which is a strong and tempting hook. Travels with a theme or a thread is always a good way of keeping a story tight – be it music, modes of transport, aspects of history or language, or whatever. And radio is in a sense ideal – it’s immediate, it’s focussed on words, and above all its rooted in places and people.

In the first couple of chapters Glover sets out a compelling manifesto about the importance of radio to communities across the world, and the ability to travel vicariously by tuning into pretty much any station in the world thanks to the internet results in a potential goldmine of material. Indeed, at the time of her writing, over a decade and a half ago, internet radio was still in its infancy, but even back then the opportunities were vast.

And so, she travels to various corners of the world to hunt down and meet the people behind various radio stations, leaning towards those lesser known and more unusual stations that have a bit more character, a bit more distinctiveness, and a bit more localness about them.

I’m just two chapters in, but I’m already enjoying Glover’s upbeat, entertaining style. It’s good to be reacquainted with her all these years after listening to her on the radio, and it’s a bit like getting back in touch with an old friend. The same humour and infectious cheerfulness is still there, and it’s a real contrast to February’s title, but I look forward to seeing if that carries on throughout the rest of the book.

We’ll find out when I blog my review at the end of the month, but I’m confidently guessing it will.