Read more about the series in this introductory page; and see the idea that inspired it – The Impossible Books of Keith Kahn-Harris. 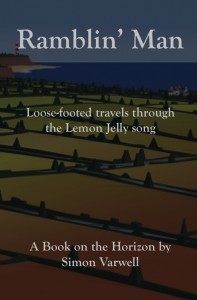 This one does what it says on the tin, really. It’s travels to all the locations mentioned in the wonderful Lemon Jelly song Ramblin’ Man.

Music and travel go together so naturally. The best of both convey a good sense of place, and listening to the music from a place is often a great way of getting to know it.

So many travel books are inspired by, or feature, music, and so many songs are about places, journeys and a yearning to be somewhere.

One of my favourite tracks with a travel connection is Ramblin’ Man, from the album “Lost Horizons” by the ambient electronic outfit Lemon Jelly.

The album is over a decade old, but its quirky samples and soft, warm feel give it a timelessness. Most of the tracks on Lost Horizons evoke a sense of journey or discovery, and Ramblin’ Man is a stand out.

It’s a gentle and soothing song with a lively beat, a perfect accompaniment to a long journey. It’s mostly instrumental but intersected with a conversation between two characters who discuss why one of them travels. The traveller recites a list of places he’s visited in a way that has a beautiful poetry and rhythm to it.

It’s all fictitious nonsense, of course. As the album’s entry on Wikipedia explains about Ramblin’ Man:

“The track “Ramblin’ Man” features a conversation between an interviewer (the voice of Michael Deakin—father of Lemon Jelly’s Fred Deakin) and “John the Ramblin’ Man” (the voice of actor John Standing), during which he lists 67 places around the world. When listed in the order in which the locations are narrated, the message “BAGPUSS SEES ALL THINGS” is spelled out midway through the song (from Brixton at four minutes ten seconds, to San José at four minutes 31 seconds) using the first letter of each location.”

And the list contains an absurd and utterly unconnected collection of places, ranging from entire countries to specific suburbs of cities. It also includes the North Pole and Atlantis.

Yet partly because it’s such a random list of destinations, and also because it is one of my favourite tracks, I would love to visit them all. Apart from Atlantis, obviously. It’s a completely pointless and whimsical idea, but that’s what appeals.

Who wouldn’t want to go to Rangoon, Patagonia or Tokyo? It’s a huge but evocatively spoken list that one cannot help but feel motivated by. And if you’re like me, you’ll never again be able to hear the word “Damascus” without wanting to gleefully shout “Mandalay!” in response.

My one and only feeble claim to worthiness here is that I’ve been to fourteen out of the sixty-seven places mentioned in the list, so I’ve got a bit of a head start already.

(If you’re interested, the fourteen are Paris, Sydney, Antwerp, Edinburgh, Granada, San Francisco, Amsterdam, New York, Manchester, Prague, Toronto, Madrid, Dublin and Belfast. And I’ve been through or near a handful of others such as San Jose, Rotterdam and I think most of the places mentioned in London.)

Visiting a pile of new places with no limit or prerequisite as to how I do it. I guess as long as I go there, I can do whatever I like, and stay for as long as I fancy. It’s a liberating and exciting premise.

There being absolutely no common thread or root to the book, other than the song. There’s a danger it might read like a very bad version of The Lonely Planet Guide to A Collection of Utterly Unrelated Places.

Even if I crack the song’s Travelling Salesman Problem and find the cheapest route to doing it, and even if I miss out the North Pole, this is going to be an extraordinarily expensive (or hideously long) journey. I can’t imagine doing this in less than a year or for under about twenty thousand pounds.

Not even remotely likely. It’s a fun concept, and many of the places mentioned in the song are near the top of my wishlist. But once I think seriously about it I lose interest. It is almost the definition of whimsy but is also, let’s face it, a spectacularly stupid idea. Even if I had limitless funds, I could think of countless more rewarding and meaningful trips to undertake with the money.

Mind you, sixty-seven locations minus the fourteen I’ve been to is only fifty-three…