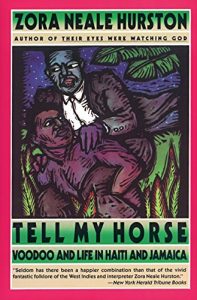 Let me start this review of Zora Neale Hurston’s Tell My Hose: Voodoo and Life in Haiti and Jamaica with a tip. Or at least, a specific tip for if you read the edition I did that contains an Afterword by Henry Louis Gates Jr (and if that name rings a bell to you and it’s not because of your interest in US literature, then yes it’s that Henry Louis Gates Jr).

The tip is this: treat the afterword as a foreword and read it first. And if you don’t have access to the version with that afterword-that-should-be-a-foreword then at least read up on Zora Neal Hurston, via her Wikipedia entry or website.

My reason for this is not just that ZNH (if I may) was a fascinating individual whose life and work, as an African-American writer who worked and died in the twentieth century, is worth knowing about. She was a prolific writer but not one who gained all the acclaim her supporters feel she should have got. She spent her later working years in teaching and as a maid, before dying in financial difficulties, ill health and, most poignantly, relative obscurity as a writer.

It is only posthumously that ZNH’s reputation grew and her body of work – both fiction and non-fiction – was seriously revisited. Gates’ commentary to this version was, to me, immensely helpful in framing her work as an important contribution to American writing of her era – despite the many criticisms made of her and her work – and he references a few pieces about and by her that I think it would be interesting to read. As I explained in my preview I approached this book with not a little intrigue, and so reading Gates’ afterword first would have allowed me to understand more about who she was and what motivated her before tackling the book itself.

There is actually a foreword in my version too, by another American writer Ishmael Reed, but it is much shorter. While happily positive about the book, it reveals nowhere near as much of the author as Gates’ afterword.

So, that tip aside, let’s get stuck in. As the subtitle helpfully explains, Tell My Horse, written in the 1930s, is about voodoo and life in Haiti and Jamaica. It’s part travelogue and part anthropology, and while the author doesn’t reveal much of herself (hence the afterword having such prior value) she immerses herself in her subjects and in the people and places she encounters with enthusiasm and passion.

As I say, Tell My Hose book is only part travelogue, but when ZNH is in travelogue mode, she writes about places beautifully and ebulliently. Indeed, her very opening words in chapter one are thus:

Jamaica, British West Indies, has something else besides its mountains of majesty and its quick, green valleys. Jamaica has its moments when the land, as in St. Mary’s, thrusts out its sensuous bosom to the sea.”

In the second part of the book she similarly introduces the Haitian capital:

The lights of Port-au-Prince had faded when the sky cleared. Then we saw the luminous sea! It glowed like one vast jewel. It glittered like bushels and bushels of gems poured into the casket that God keeps right behind his throne for beauty. The moving fish put on their gliding. It was a privilege to move upon this liquid radiance.

And later, on a nearby island:

I found on this remote island a peace I have never known anywhere else on earth. La Gonave is the mother of peace. Its outlines which from Port-au-Prince look like a sleeping woman are prophetic. And the moonlight tasted like wine.

Though her writing can be so verbose and flowery at times she even at one point seemingly invents a word – writing in chapter one:

…Brother Levi, who is a scrontous-looking man himself.

I spent a few minutes online searching for the word “scrontous”, with the only results being that quote from the book itself (and one other link similarly curious about this mystery word). If you can shed light, shed away!

The book’s energetic start is a little bit of a weakness, in that the author is straight out of the blocks and into her subject matter, and it takes some considerable time to adjust to her flow and style, and to get a measure of the woman as writer and narrator. She can ramble along happily, her ultimate point unclear in the midst of her busy narrative. Again, Gates’ afterword should have come first.

Much of the narrative is of course on the anthropological side, accounts of events she went to, conversations with locals including experts on the subjects she is pursuing, or folklore she passes on. She participates in a variety of events such as ceremonies, festivities and the like, from weddings to voodoo rituals, and she describes in tremendous detail the recipes, clothing and words involved. It’s meticulous, fascinating, and at times a little academic, but she writes with genuine interest and on the back of evidently deep research.

Reflections on race, and the white elites in both countries, are common, though curiously to me she rarely reflects on this on a personal level or expresses much in the way of rage at the injustice that is evident. Perhaps this is a part of the conditioning she has faced as an oppressed Black American. Perhaps it is a softening of her tone for what I suppose may not have been an exclusively Black readership. Perhaps it’s the level-headed academic in her. Or perhaps as an American, even a discriminated and oppressed African-American, she still feels herself immensely privileged against the backdrop of the poverty and colonialism of the Caribbean. Either way, this, I think, is a sad miss.

Her anger seems stronger on matter of gender discrimination, however. She paints Jamaica as an especially sexist culture, and writes:

The old African custom of polygamy is rampant down there. The finer touches of keeping mistresses come from Europe, however. The privileges those men have of several families at a time! And their wives don’t like it a bit better than we do, but the whole national set-up favo[u]rs him and crushes her.

Elsewhere she recounts a discussion with a Jamaican man who rails against American women, “whom he thought the most beautiful and vivacious women on earth, and then to think what little use they were as women.” Amusingly she responds to his lecture but is met with a sadly all too familiar dose of mansplaining: “I tried to name some women of genius but I was cut short. The man was vehement.”

Where the book is at its strongest, the prose the most fluent and the narrative the most engaging, is when she retells stories she hears from the folklore of the two countries she visits. There are haunting and chilling legends, spooky stories you really want to read with the light on, horrible and macabre crimes, weird traditions and secrets, and of course the descriptions of voodoo. There are even one or two first-hand accounts as she meets a Medicine Man in Jamaica who sliences a mountainside of frogs, and has an encounter in Haiti with a “zombie”, a man possessed.

And there is one short anecdote from which she takes the title of her book:

Ok so this is why this month's #ReadingFemaleTravelWriters title is called Tell My Horse. I wasn't expecting that explanation. pic.twitter.com/9Szjlk9hKA

Sometimes, her descriptions of these events can be as beautiful as they are chilling. At a funeral, for instance, she writes:

“Harmony rained down on sea and shore. The mountains of St. Thomas heaved up in the moonlessness; the smoking flambeaux splashed the walking herd; bare feet trod the road in soundles rhythm and the dead man rode like a Pharaoh – his rags and his wretchedness gilded in glory.”

Tell My Horse is a fabulous, weird and unusual book, and definitely the most distinctive of my series of so far. Is it the best? No, though it is so different it almost impossible to make it measure against the others. It’s immensely enjoyable, though, and Zora Neale Hurston is a terrific writer with an irrepressible and inquisitive mind. She is great, if sometimes odd and frustrating, company throughout Tell My Horse, and someone who – for all she veers away from introspection or personal revelation – quietly looms large in the story and makes you want to find out more about her.

I will read more of her, I think. Her autobiography sounds especially good, and will be a great way to find out more about the life of a woman I only gained a passing acquaintance with through her writing of Tell My Horse.