Sometimes in life, it’s worth trying something a second time. And indeed a third.

As is my habit, I spend a lot of time on trains, particularly the line south from my home in Inverness to Edinburgh. It’s a line that of course I am a bit tired of now, though it did at least give me the idea for my latest book, so I mustn’t grumble.

And I have been inspired by doing the book to see a bit more of the line from the other side of the train window, such as at the Pass of Killiecrankie.

One of the most spectacular parts of the line is the Clava viaduct, a short distance south of Inverness. As you travel hundreds of metres above ground level along the gently-curved viaduct, you do get a little chance to look back on yourself – at least thanks to the long shadows of morning sun.

And so to this first photo, which realise I took in 2008, a scarily long time ago.

Seeing the graceful arches cast dramatically across the countryside really makes you realise what an impressive structure it is. It encourages me to try to pay attention to what I see on this line, a line I at times feel I know intimately yet am constantly surprised by. 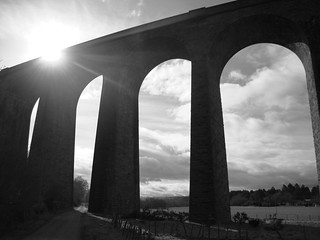 And yes, you can see the Clava viaduct from below too.

It’s well worth doing so, as I blogged some time ago. You get a real sense of not just its might but the tremendous feat of Victorian-era engineering that led to its construction.

It’s quite awe-inspiring, and not a little vertigo-inducing, to slowly approach it and stand under its mighty arches.

But there’s something special about riding the line over the viaduct – knowing that for all that it is an enormous structure, you’re currently, briefly, on top of it.

And so to the second photo, which I took just two years ago one morning.

As we crossed the viaduct I realised the sun was low and the shadows long, and I quickly reached for my camera and snapped this. 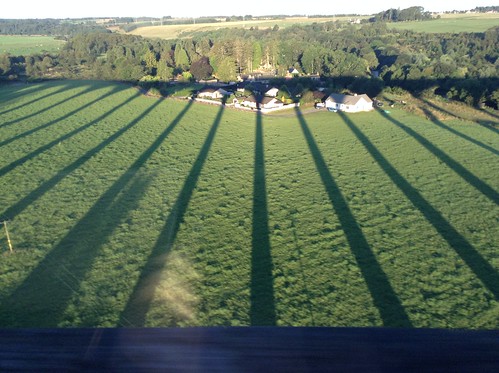 It’s not perfect – the glare of the reflection somewhat distracts from the impact of the shot, something kind of repaired by this crop I put on Flickr at the same time.

But something of the vast scale of the photo is lost with the crop, I think.

And so, just a few days ago, I found myself in the same situation – funnily enough, almost the same day in August two days later – and rushed for my iPhone. I was impressed with what I had taken, and so I tweeted it.

Crossing the Clava viaduct on a beautiful morning as the @scotrail service takes me south. pic.twitter.com/9yAnLLwUCA

I like this third one. I think it’s the best. What it lacks in width, to emphasise the length of the structure, it gains in the height as it strongly emphasises the stretch in the shadow and the sense that the viaduct is reaching out to the houses and the hills beyond.

Plus, there’s no reflective glare. See it here on Flickr.

I note the three photos are all taken on bright summer mornings in July or August. If you find yourself on the train south of Inverness early on a bright morning at that time of year, take a good camera.

And remember to sit on the right hand side of the train.