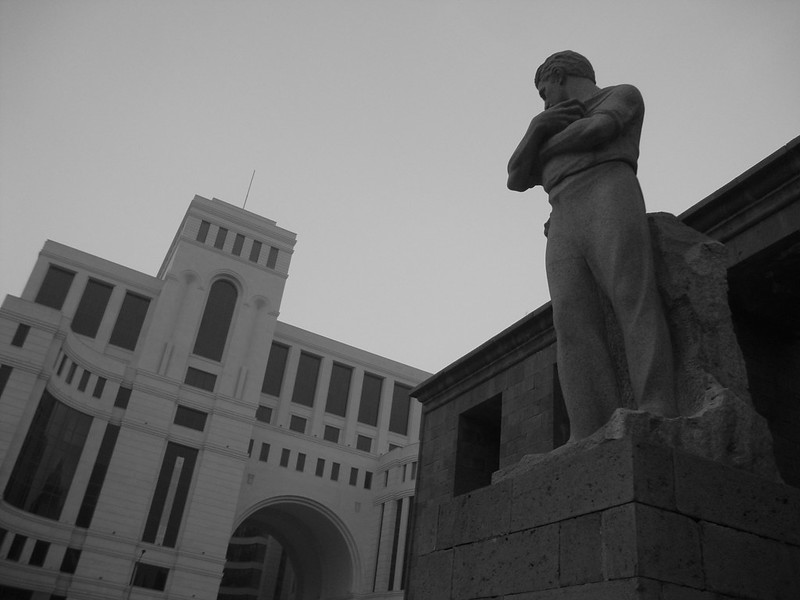 In my previous posts I’ve hopefully set the scene a little regarding Armenia and, especially, Yerevan. But rather than boring you with more stories and anecdotes from my time in the city, I thought I would simply share a random bunch of photos that hopefully give more of a feel for the interesting city that it is, a city whose current state so comfortably and effortlessly embraces both its Soviet past and its very European aspirations.

With territory lost and a new capital to develop, there has clearly been great pride and planning in modern Yerevan during the past century. Everywhere you see new building sites, new constructions – some attractive, others less so – and modern monuments. 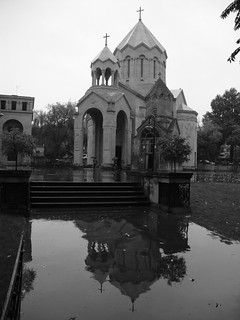 Nothing in this city is particularly old, with the occasional exception such as the tiny Katoghike Church, whose more modern neighbouring buildings are the Yerevan seat of the leadership of the Armenian Apostolic Church.

That’s a hugely important denomination, by the way; a historically independent church in the Orthodox tradition that is of course found not just in Armenia but throughout the world wherever there are significant exile populations.

Indeed, one of the Armenian Apostolic Church’s most important foreign stations is in Jerusalem. As any Armenian will quickly tell you, Armenia (in its fourth century manifestation) was the first country to officially adopt Christianity as a national religion.

As such, the Armenian Quarter is one of the four quarters of Jerusalem’s Old City. I remember visiting it in 2001, and sitting in a dimly lit church listening to a haunting service delivered (well, mostly chanted – by monks whose beards were almost as long as their robes) in Classical Armenian, in a format and tongue perhaps little changed through those many centuries. 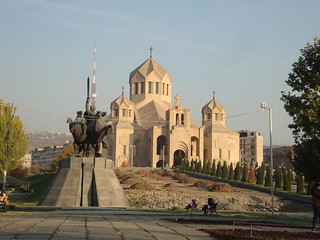 Many such old roots of the church are lost, however, because although Armenia is dotted with beautiful old monasteries and churches, a huge number across central and eastern Turkey were demolished – along with their historically important collections – during the genocide.

Again, given Yerevan’s relative youth as a big city, so many of the churches found today in the city are relatively new, and striking due to their crisp, unweathered angles.

Secular architecture is just as noteworthy in the city, arguably more so. Not least given Alexander Tamanian, the mastermind of much of the city’s architecture, appears not to have had religious projects among his extensive repertoire.

One of his masterpieces and one of Yerevan’s most important focal points is the impressive Republic Square – a spacious (almost too spacious) oval of grand-looking government buildings, one by one becoming exclusive hotels. 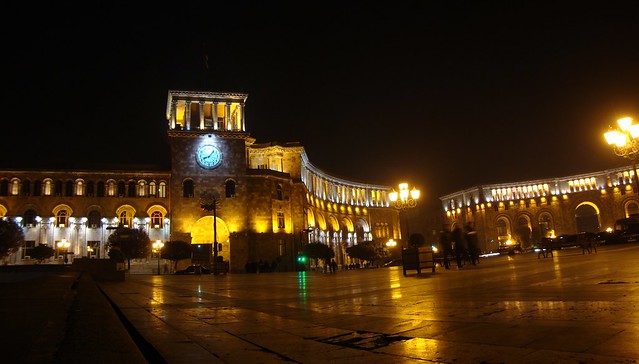 I’m told that earlier that year the American rock band System of a Down held the finale of their “Wake Up The Souls” tour in Yerevan, the first gig in the country for a band that is famously comprised of Armenian exiles or descendents. One rainy night in April, 50,000 people – in a country of less than three million – crammed into Republic Square for what surely must have been one of the defining events of modern Armenian musical history. 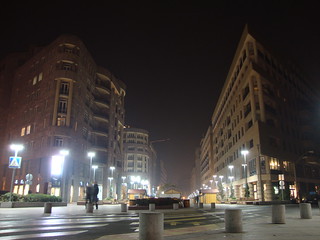 Even Yerevan’s most modern constructions often bear Tamanian’s posthumous influence. One of the most controversial developments in the city is Northern Avenue, a wide pedestrianised street linking Republic Square with the Opera Theatre.

It was based on a plan originally conceived by Tamanian but not implemented until just a few years ago.

Built at the expense of some of the city’s last remaining nineteeth century buildings, Northern Avenue is in many ways a new focal point for the city, and is home to luxury shops, offices, apartments and restaurants.

Apparently beneath the street in what was previously an underground car park will soon sit the country’s first McDonald’s. 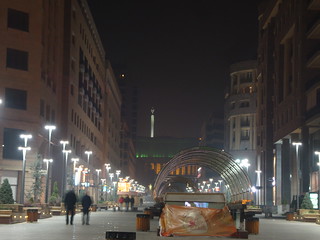 Northern Avenue, while not necessarily beautiful, is certainly eye-catching in its dramatic and uncompromising sense of grandeur.

Although very modern, its glitz balances nicely with the early twentieth century Soviet feel of the rest of the city, and one or two buildings wouldn’t look out of place among the Art Deco masterpieces of, say, London or Brighton.

But despite this influx of money, fuelled in part by rich diaspora investors from places like Russia or the USA, there still exists plenty reassuring sprawls of concrete for hunters of Sovietana. Two spring to mind that are well worth checking out. 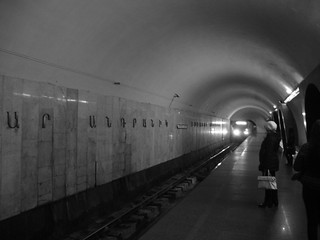 One is Yerevan’s metro system. Now the Soviets really knew how to do an underground railway, and Moscow for example is world renowned for its absolutely gorgeous stations.

I’ve never been there, and while Yerevan’s metro is by no means breathtaking in its scale or style, it still has a lovely, crisp feel, and – if this is not a contradiction in terms – something of a modest grandeur about it.

Though the trains are something of a contrast – small, spartan, orange vehicles that rather bring to mind Glasgow’s subway.

The stations, too, can be impressive if somewhat weathered. Republic Square station has a particularly faded feel to it, but a lovely atmosphere if the light is right. 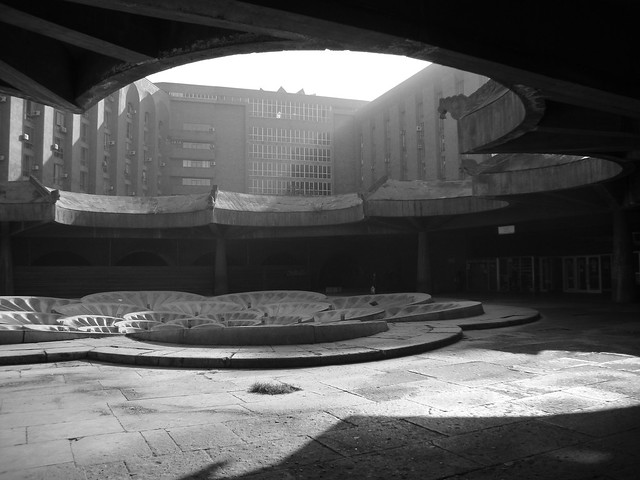 The other nod to former times is that staple of central and eastern European culture, the open air market. The Vernissage market is, I think, open all week but especially alive and worth visiting on a Sunday. Like a lot of big city markets it is a sprawling village in its own right with everything on sale from mechanical equipment to to tourist tat to food. Art work is, however, as the name suggests, a major feature. 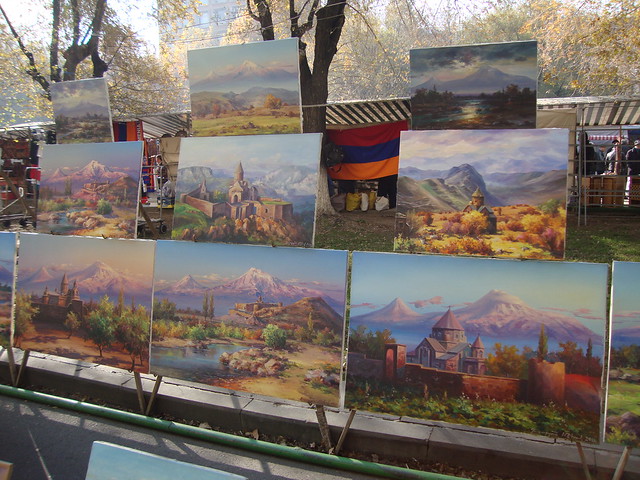 The Vernissage feels a world away from some of the brash modernity seen elsewhere, and I suppose this will always be a feature in Yerevan’s character. On the one side it is a city with unmistakeable and unashamed Soviet personality; and on the other it is a modern European capital. It juggles both, I think, very well.

Hopefully my photo set as a whole gives a sense of that.