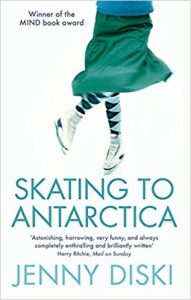 The best way of describing Skating to Antarctica is as two books in one. And I mean that both positively and negatively.

To start with the positive, Jenny Diski is a superb writer. Perceptive, reflective, gentle, poetic and a great writer about people, places, thoughts, ideas and feelings. And the two books that Skating to Antarctica is composed of are both magnificent and powerful.

This month’s book is, in a nutshell, an account of the author’s journey to the white wilderness of Antarctica at a time in her life when she is deeply reflecting on her childhood in London, her parents and the impact of her upbringing on her eventful emotional and mental state. Growing up with a difficult background and a dysfunctional home life, Diski confronts some of her big questions about her life and life in general by revisiting her past and by travelling to Antarctica.

The two parts are wonderful. Her journey to Antarctica is well-written, and she brings to life the weird and wonderful characters she travels with and describes with gentle wit and biting impact the experience of sailing, the wildlife, and the dramatic landscapes and icescapes.

She writes with passion about the famous pioneering explorations of Antarctica, and one particular highlight is her description of the history and landscape of Grytviken, the abandoned village on the island of South Georgia that was home to a whaling station and was occupied during the Falklands War. In her own words:

“If derelict landscapes… appeal, then Grytviken is a pearl of desolation. A rust-bucket ghost town, left to rot in its own beautiful way… It looked idyllic, if a little vulnerable, as if a brave attempt at human assertion were being pushed ineluctably into the sea by the encroaching island itself…. A couple of dead hulks of half-sunk whaling ships to either side of the inlet finished off the symmetry of decline.”

She also links her motivation very well to her mental illness, seeing a link between the spartan whiteness of a past hospital room with what she dreamed would be a similar blank canvass on Antarctica. As such, while she writes much more gently than Tete-Michel Kpomassie, with whom I drew comparisons in my preview, the two authors share a deep yearning to reach and be a part of this great empty iceland.

Her health is not her only motivation to travel, however. She beautifully articulates the “because it’s there” factor, too:

“I was very taken with this timeless standing [by penguins], unwitnessed, unwitnessing, that we were interrupting, though only barely. That was the point, for me, of Antarctica: that it was simply there, always had been, always would be, with great tracts of the continent unseen, unwitnessed, cycling through its two seasons, the ice rolling slowly from the centre to the edges where eventually it breaks off. A place that is and always has been unseen.”

But that link between her personal, inward reflection and her external journey isn’t always quite so persuasive. A chapter or two in, she begins that second storyline about her attempts to rediscover and reevaluate her childhood through the medium of rediscovered old neighbours. Her interviews and reflections thereon are beautiful, brutal and brilliant, and left me captivated by her vivid and unashamed candour about her life and the actions of her parents. And it’s amazing that, given all she went through, she turned into such a gentle, brilliant writer.

But, very sadly, it just doesn’t fit. Flitting between the inward and outer adventure reflects well on the place (emotional and literal) that Diski finds herself in that period of time. But the scenes in London disrupt the otherworldliness of her account of Antarctica, and fray the at times imperfectly rendered reasons for her journey. At times, I wondered whether it actually stopped the book from counting as travelogue.

But where it unquestionably is in travelogue mode, it’s a fine example of the genre. And to give my customary attention to the core purpose of this mission, Diski undertake a journey that absolutely didn’t require a man to do it. Indeed, such is her deep reflection, her emotional response to what she sees on her travels, she definitely brings a value and impact that I don’t remember seeing in male travel writers. Many of the men I’ve read can be reflective, contemplative and beautifully descriptive. Whether I can recall any who have used their emotions, their souls, their very selves, to interpret a journey like Diski does, I am unsure.

Although most renowned as a novelist, Diski’s thoughtful prose absolutely soars in a non-fiction environment. But given that her later travelogue, Stranger on a Train, looks like it flits in the same way between an outward adventure (the USA by rail) and inward reflections (on her teenage years), I perhaps might reach for one of her novels sooner than more of her travel writing. Unless comments below persuade me otherwise (and I am persuadable).

Jenny Diski is (or was, before her death) a fine writer – as fine as others I’ve met in this year-long challenge so far, and more so in many cases. But because Skating to Antarctica contains two excellent accounts that I am not convinced needed to be woven together in this way, nor benefited from it, I am left loving Diski as a writer but not unqualified in my commendation of this admittedly remarkable, powerful book.