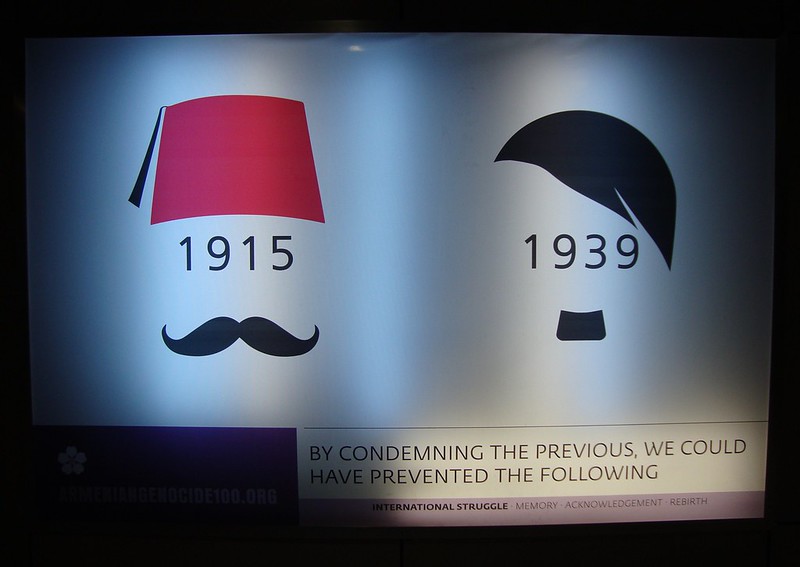 If you arrived any time around 2015 at Zvartnots International Airport in Yerevan, Armenia you will have been quickly greeted with what must be one of the most extraordinary messages on offer in an arrivals terminal anywhere.

The message is a poster featuring two caricatures – one a generic fez-topped, moustachioed Turk, the other unmistakeably Adolf Hitler.

“By condeming the previous,” the text proclaims, “we could have prevented the following“.

Visitors are left in no doubt that this is a country with a dramatic and devastating history, and the point is powerfully hammered home that 2015 is the one hundredth anniversary of the Armenian Genocide.

At the time of the First World War, the Ottoman Empire was one of Europe’s great powers. It was in its dying days, but at its peak it stretched as far west as the borders of what we today call Italy and took in huge swathes of territory from the Balkans to the Caucasus. The empire was, therefore, ethnically diverse, containing Albanians, Slavs, Greeks, and of course Turks among many others.

In its east lay the bulk of the empire’s significant Armenian population. One hundred years ago there was a wave of ethnic cleansing, deportations, rapes, arrests and murders of the historically Christian Armenians. The events are accepted by many countries – though too few – as meeting the definition of genocide. Unsurprisingly Turkey does not share this assessment.

The genocide – I’m no historian but I’ll call a spade a spade – was a traumatic event that has utterly defined the Armenian people to this day. Beyond the hundreds of thousands killed, many others were displaced. Many fled abroad, leading to the comparatively huge Armenian diaspora, with notable populations in places like the USA, Russia, France, Lebanon and Iran. Others fled east to the territory now contained in the country we know today as Armenia, a tiny slither of land which was independent for a short time after World War 1 before becoming part of the Soviet Union.

Among the upheaval caused by this migration is a curious lingustic situation. Western Armenian – a dialect of the ancient and unique language of Armenian – was spoken across much of the Armenian-populated areas of what today we’d call Turkey, and thus it is the predominant tongue of the diaspora (if, indeed, they have kept speaking it, as many haven’t).

The notably different Eastern Armenian dialect, however, is the language of the people in today’s Armenia. Not only was this a challenge when so many Western Armenian-speaking refugees headed east to a different dialect territory, but it also creates a bizarre paradox for the occasional modern-day returnee from the diaspora: Armenian exiles coming home to a land which was never quite their Armenia, to a land which does not quite speak their Armenian.

Another consequence of the displacement following the genocide was that the previously insignificant Eastern Armenian village of Yerevan, so long a relative footnote in Armenian history, suddenly had to cope with hundreds of thousands of refugees and also with the hastily-acquired status of capital of the newly independent republic.

What we today call Armenia, then, is a strange ghost, a land haunted by its past and a mere shadow of the nation and territory it used to be part of. 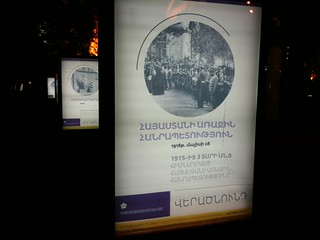 Today’s Republic of Armenia, independent again after the fall of the Soviet Union, nevertheless embraces this history. What happened in the Western Armenian parts of the Ottoman Empire one hundred years ago is owned, felt and retold with urgency and determination.

Posters similar to that seen at Zvartnots airport are found all over Yerevan’s wide, modern streets. Exhortations to remember. Commemorations of notable victims. Appeals for a repeat never to happen.

Even without this commemorative milestone, however, the genocide looms large in the national identity and public consciousness. 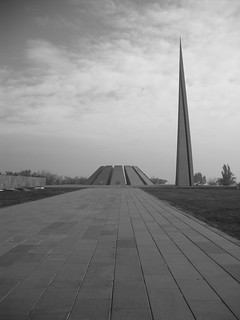 Standing quietly and serenely over Yerevan on a modest hill a fair walk from the centre is one of the city’s must-see icons: the tongue-twistingly titled Tsitsernakaberd, the genocide memorial and museum.

To visit it is to understand the country so much more deeply.

The complex is simple, uncluttered and haunting. The main points of memorial are a stone circle representing the twelve lost provinces of Western Armenia and a 44-metre tower that apparently represents Armenia’s rebirth. Both are stark and dramatic, and although very different they complement each other beautifully.

Indeed, on my walk up to the memorial I passed a roadside commemoration poster which featured a reimagining of the monument as an inkwell and pen – evoking Armenia’s rich literary heritage, much of it lost in the genocide due to the arrest, massacre or disappearance of leading creative and intellectual figures.

It’s a clever and striking representation, and it initially made me wonder whether the design of the memorial was meant to point towards this – until I was told later of the twin structures standing for the past and the future. 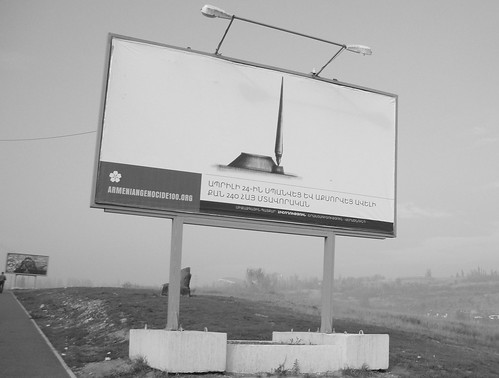 Down some steps lies the memorial’s museum, with a substantial exhibition that outlines and explains the genocide in detail. It starts by setting the scene, illustrating Armenians’ enormous contributions to many areas of life in the Ottoman Empire. Then it describes the political and social circumstances that led to the prejudice, discrimination and ultimately systemic violence against the Armenian population by the authorities.

Although the exhibition sticks to the facts and avoids resorting to patriotic jingoism, no details are spared in the extremely well-laid out and engaging interpretations. The extent of the massacres, forced marches into the Syrian desert and mass deportations are set out plainly, with photographs, written testimony and other historical documentation. Much stock is also given to the international response – or the lack of it. With much of Europe busy with the First World War, the genocide did not figure much in political discourse, and none of the great powers come away well from the museum’s account.

Much space is given, however, to a few heroic individuals – diplomats, journalists, missionaries and others – from across the world who bore witness to the events and their consequences (including one Ernest Hemmingway, and the Swedish missionary Alma Johansson), those involved in working with refugees, such as the Norwegian humanitarian Fridtjof Nansen, or those who tried to intervene or who saved many lives.

It is the specific stories that really shine through in the museum, such as the systematic massacres, the hundreds of thousands of orphans, the forced conversions, the terrible acts of violation and violence against individuals; plus some of the (relatively) better known occurrences like the siege and rescue at Musa Dagh, the tragic experiences of Aurora Mardiganian, or the extraordinary events of Operation Nemesis.

There is so much to take in, it is hard to process the sheer scale and depth of what happened. Although there is some focus on the events of after the genocide – such as the (too few) trials of Ottoman army officers under post-war British occupation – I found myself wondering as I approached the end of the exhibition how the story would be wrapped up.

How do you conclude a portrayal of the deaths of around one and a half million people? How do you manage to squeeze all the different threads of justice, rebirth, peacemaking, reconstruction and remembrance into one coherent finale? How can you quantify everything that happened in the genocide and find a positive, hopeful outcome?

As I ascended the steps from the final exhibition, I realised that they had answered this question in a simple but powerful fashion.

Printed in stark lettering on a bleak white wall, the Armenian genocide memorial museum gave the final word to a certain Adolf Hitler:

“Who, after all, speaks today of the annihilation of the Armenians?” 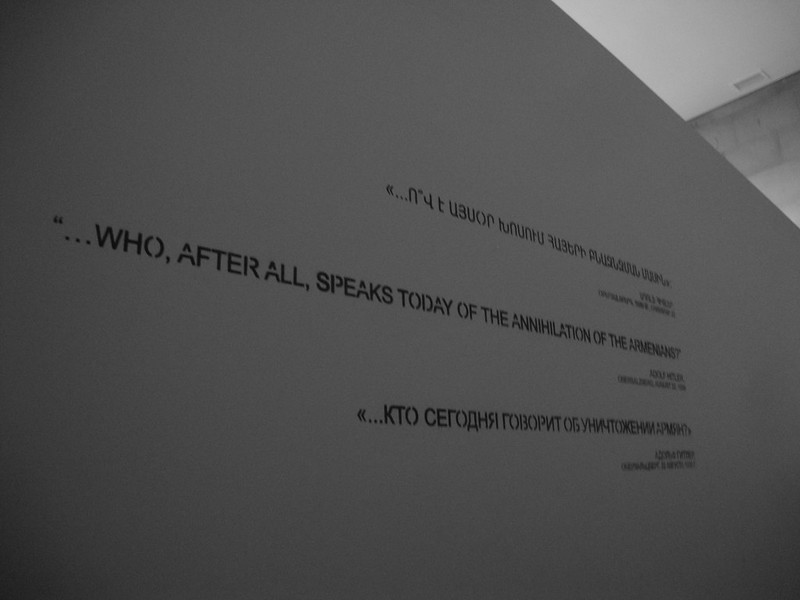