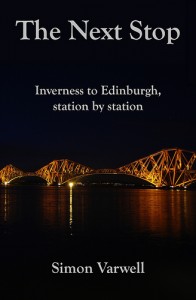 The Next Stop, the story of my six-day, stop-by-stop journey down the Inverness to Edinburgh rail line, is now out.

It’s a tale of mystery, wonder and adventure in the most unlikely and most ordinary places – a journey of dodgy pubs, quiet villages, fascinating local history, and lots and lots and lots of walking.

It’s available in a number of formats. In what was a slow and self-taught process, I formatted and designed them all pretty much myself, including the cover. The only thing I didn’t do was the map of the route inside each version, which was kindly knocked together by my friend Donald Noble using the nifty open-source mapping software OpenStreetMap.

Here’s a quick guide to the four versions of The Next Stop. The links are to the UK versions, though of course other regions elsewhere in the world are available.

Paperback – the paperback version was made on CreateSpace and is available through Amazon. The cover, of course, is wrap-around, hence the slightly different front cover from the ebooks.

iBooks – one of the great things about iBooks Author, the software on which you can write iBooks, is the ability to easily include photos. It’s no trickier than creating a series of PowerPoint slides. I enjoyed illustrating this version with photos from along the route, hopefully bringing the story a little bit more to life. At the time of writing the iBooks version is not yet online, but I’ll add a link as soon as it is.

If you don’t buy the iBooks version – or, frankly, even if you do – I’ve created a photo accompaniment on Flickr which includes some of the sights from along the way.

I’ve been very conscious that I want the book to be as reasonably priced as possible. Partly this is a length issue – The Next Stop weighs in at only about two-thirds of the length of my first two books, for example. But also, not surprisingly, I want to encourage as many people as possible to buy it.

So, the ebooks are all around £1.50 and the paperback is £5.00. One of the advantages of doing the paperback the way I did was that it is print on demand. This means that each book is printed and posted out as and when orders come in. So there’s no huge cost outlay for me, and I can reduce the profit margin as much as I can. There’s a benefit for the reader in terms of the low paperback price too – you only need to buy two copies on Amazon to qualify for free postage. So buy one for a friend, and you get two for £10!

But it’s not all about the money, of course. It’s also hopefully an enjoyable read, and I certainly enjoyed both doing the journey and writing the book.

If you have any feedback on The Next Stop, I’d love to hear it. And please do consider posting a review on the site you bought it from or on Goodreads.