I had an email a few weeks ago from someone at MCanvasPrints, a London-based company that produce canvas prints of photographs. They are obviously in need of some publicity and I assume they have been trawling websites that feature photography, because they offered me a free print in exchange for an impartial review.  Which was jolly nice of them.

The photo I chose is the one on the right, a photo I took a few years back of Inverness’s Greig Street bridge at night. It took me a while to decide which was my favourite photo and which would suit canvas, though – I wanted to go for something bold, colourful and striking, and ideally something that would be of Inverness.  This one is one of my favourites.

Within a week or so, the canvas arrived – a 16 by 12 inch print, securely wrapped, spotless after its journey from London and short stay at the local postal sorting office.  It is well put-together and very detailed thanks to a high resolution photo.  It’s nicely wrapped around the frame, using a mirror edge which I chose over one that would involve losing some of the border and corners, if that makes sense.  The staff I dealt with by email were also very helpful, prompt and informative. 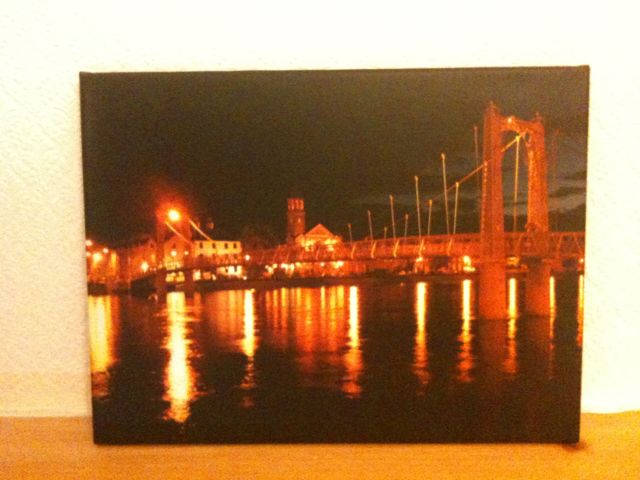 The photo does have a lot of dark on it, but stands out really well against the white wall where I’ve temporarily leant it.  I’ll hang it up soon once I decide on a spot.

I’m really chuffed with the canvas, it’s a lovely job they’ve done, and the customer service was excellent.  If I get canvasses done again I will definitely go with MCanvasPrints.

However, at £43, the canvas I got does seem to be at quite a high price, and not one I would want to pay except for special occasions – thought I say that having not had the time to sit down and compare canvas with print price-wise, so I may stand corrected.  But I’ve been thinking about putting some of my favourite photos on a wall somewhere in the flat, and at £43 for 16×12 inches, I am not convinced that canvas would be the way to go.

Of course, canvas isn’t about replacing normal photograph prints, and shouldn’t be judged on that basis: it’s more that I am unconvinced of what can be achieved with canvas that can’t with a decent print.  Canvas is a different look and feel, though, and it’s one that MCanvasPrints clearly do excellently.  If you’re into canvas prints, then I can highly recommend these guys.